Can Peter Parker grow beyond his Queens neighborhood? Far From Home answers the question in passable fashion. 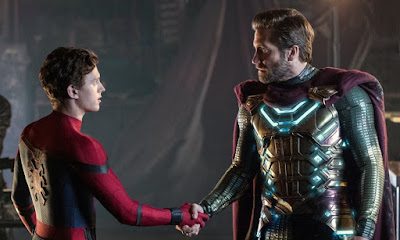 Riding the emotional wave that Marvel set off in Avengers: End Game, Spider-Man: Far From Home turns out to be a serviceable entry into the Marvel repertoire: a collection of less-than-impressively realized action, a surfeit of good-natured humor, and an appealing young cast headed by stand-out Tom Holland as Spider-Man.

This edition takes Spider-Man abroad. Peter Parker (Holland) joins his high-school class on a trip to Europe. Stops include Venice, Prague, and London as the story hop-scotches across cities that are threatened with destruction by creatures called Elementals: i.e., earth, water, and fire monsters that wreak havoc. Can any Marvel movie be considered complete without reducing some part of a major city to rubble?

Marisa Tomei returns as Aunt May; Jon Favreau appears as Happy, Tony Stark's former bodyguard and chauffeur; and Samuel L. Jackson, looking less than enthusiastic, reprises his role as Nick Fury, the head of the outfit that runs the Avengers.

Added to the mix is Mysterio, a superhero portrayed by Jake Gyllenhaal. Mysterio wears a helmet that looks like a some dropped a fishbowl on his head; he also has an alter ego. Out of uniform, he's Quentin Beck.

Super-sensitive about spoilers, Columbia Pictures has encouraged critics not to ruin the movie’s surprises. I won’t say more, except to note that not all of them have the hoped-for kick.

Holland works hard to be the energetic and conflicted, the not entirely mature Spider-Man that we’ve come to expect, and, yes, his naïveté and sincerity prove engaging.

All in all, this edition of Spider-Man is not only far from home, but it’s also far from being a disaster. Far From Home unfolds without giving offense or ascending into the upper ranks of Marvel's unending list of movies. Put another way: Far From Home passes muster.

But, know this, as well, Far From Home hardly lays a glove on the much more imaginative, Oscar-winning Spider-Man: Into the Spider-Verse, 2019’s Oscar winner for best-animated feature.