Is everybody fine? Not really 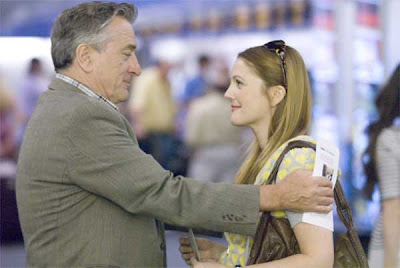 De Niro and Barrymore as father and daughter.

Everybody's Fine -- the Americanized remake of Giuseppe Tornatore's 1990 Stanno tutti bene -- begins with shots of Robert De Niro vacuuming a living room. Consider it part of an on-going trend, the domestication of De Niro, an unfortunate progression for which the actor himself deserves some of the blame.


At 66, De Niro has decided to play a widower who travels around the country checking on his grown children. I'm not suggesting that men should not use vacuum cleaners or that familial reconciliation is an impoverished dramatic theme. I am suggesting that watching De Niro tend to an empty house just doesn't stir the imagination.

De Niro couldn't remain the incendiary Johnny Boy of 1973's Mean Streets forever, but can't he find material that matches the intensity of his best work? Is it him? Is it the scripts? Do we really need a Meet the Fockers sequel, due in 2010?


Aside from providing a progress report on De Niro's career, Everybody's Fine -- which was directed by Kirk Jones (Waking Ned Devine) -- explores the sad gap that develops between a retired father and the children he has raised, often by pushing them too hard.

Despite the rich possibilities of its premise, Everybody's Fine never quite clicks. It's as if a great theme -- the protective lies we tell ourselves -- has suffered a debilitating deflation, lapsing into something only vaguely substantial.


Jones turns De Niro's Frank Goode into who man who spent his life helping to manufacture protective casing for telephone wires. As Frank travels around the country by train, he looks at the telephone lines that have opened up so much communication. The irony is as inescapable as a call from a telemarketer: Frank may have helped connect a nation, but he's not much of a communicator when it comes to his family.

As the screenplay -- also by Jones -- unfolds, we learn that Frank doesn't know the whole truth about his children, played by Kate Beckinsale, Sam Rockwell and Drew Barrymore, three actors whose looks make it difficult to believe they've arisen from the same gene pool.


Frank's cross-country journey begins in New York City, where he tries to surprise his son David, a painter. Unable to contact David, Frank continues on to Chicago where Beckinsale's character operates an ad agency. Next up Denver, where Rockwell works as a musician. Finally, Frank arrives in Las Vegas, where Barrymore earns her living as a dancer. Each stop reveals something about the lives of Frank's offspring, details that conflict with Frank's beliefs about his kids.


For all the traveling Frank does, the movie takes us nowhere we haven't been before, as it slowly discloses why Frank didn't find David at home, not that there's any great surprise looming. I half wondered whether De Niro vacuumed away all the movie's loose ends in those opening images. Whatever the case, the rest is mostly procedure.

Posted by Robert Denerstein at 5:45 PM