He fires people and then takes flight 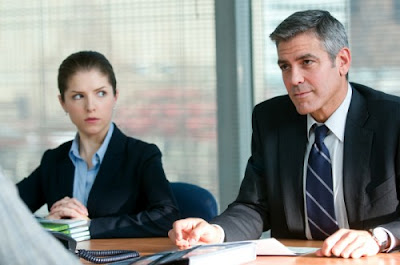 
Last week, I read a news article that reported that the U.S. economy had lost 169,000 jobs in November. As it turns out, this generally sobering bit of news was considered mildly positive because it represented 26,000 fewer job losses than had been recorded in the previous month. Now think about this: Someone had to tell those 169,000 jobholders that they were about to join the ranks of the unemployed. Up in the Air, director Jason Reitman's engaging new movie, focuses on a man who does just that. Ryan Bingham makes his living by telling others that they've lost theirs.


For my money -- what there is of it -- Reitman (Thank You For Smoking and Juno) is one of the best mainstream directors working today. He knows how to take a serious subject and make it entertaining. His movies have depth, but not so much that they lose their ability to amuse. He has a fine ear for dialogue and he knows how to put the right actors in the right roles. I don't know whether Up in the Air will stand the test of time, but it sure hits the sport right now.


Loosely adapted from a novel by Walter Kirn, Up in the Air gives George Clooney a chance to do what he does best. He plays an unfeeling bastard who lives in a hermetically sealed world in which he has crowned himself king. Clooney's Ryan Bingham works for a company that does corporate dirty work. Instead of facing up to the difficult task of firing people, companies hire Clooney's firm -- run by a character played by Jason Bateman -- to do the job for them. The poor victim gets the ax and is handed a packet that explains all of his or her "options." Isn't that great?


Bingham is able to do such unpleasant work because he travels light. When he gives motivational talks, he encourages listeners to empty the metaphorical backpacks that are weighing them down: they're supposed to remove little things such as possessions and families. In the gospel according to Bingham, one must give up all attachment to have everything.


Make no mistake, though, Bingham isn't interested in developing his spiritual purity; he's addicted to all the comforts his company credit card can buy. He also revels in the anonymity of hotel rooms and hotel lounges. He wants to accumulate 10 million frequent flyer miles, something only six other humans have accomplished. For him, that would be a kind of crowning life achievement. He's at home in all the places in which most of us feel slightly alienated. For Bingham, disconnection means freedom.


For Reitman, landing Clooney to play the role of Bingham must have been like opening his garage and finding out that an old clunker had been replaced by a Porsche. Clooney has all the right attributes for a part that's glib, attractive and confident. And like Paul Newman, he can play a heel who knows how to charm an audience.


For a guy such as Bingham, being taken off the road is the equivalent of slow death. And that's what's about to happen shortly after the movie starts. Bateman's Craig Gregory listens to a recent business-school grad (Anna Kendrick) who believes that the company can save lots of money firing people via teleconferencing. Bingham's boss orders him to take Natalie on the road so that she can learn the ins-and-outs of letting people go. Natalie and Bingham soon depart on their blight-spreading adventures.


So what happens to give Bingham a glimpse of an alternative way of life? A woman, of course. On the road, he meets Alex Goran (Vera Farmiga), another business traveler. In a finely written comic scene, Bingham and Alex meet in a hotel bar, sharing some of their most intimate possessions; i.e., they compare credit cards. Clooney and Farmiga (who never has looked more glamorous) generate plenty of heat. Alex seems to be Bingham's dream girl: "Think of me as yourself -- only with a vagina,'' she tells him. Like him, she's not looking for attachment.


Of course, Bingham begins to develop a fondness for Alex that goes beyond one-night stands and their mutual disregard for anything resembling commitment. At one point, he even invites her to accompany him to his sister's wedding. They have a great time. Love seems to be blooming. Bingham even takes on the job of trying to talk the groom (Danny McBride) out of a last-minute case of cold feet.


Given Reitman's sense of humor, it's no surprise that Up in the Air tempers painful realities with humor. Kendrick and Clooney do an engaging odd couple number, as Ryan educates his young charge in the fine art of firing folks. Scenes of people getting fired involve some actors, but mostly are played by people who at one time have been fired. Some of the responses of these "non-actors" can be painful to watch.


I can't say that Up in the Air is a full-blown critique of capitalist brutality. But it has plugged into something else about contemporary life, the creation of faux communities -- flyers, Facebook pals, airport buddies, etc.


Sexy, entertaining and willing to bite, as well as kiss, Up in the Air qualifies as one of the year's best movies, perhaps Reitman's most broadly appealing film to date.

Posted by Robert Denerstein at 8:12 PM