No surprise: The star is Welles 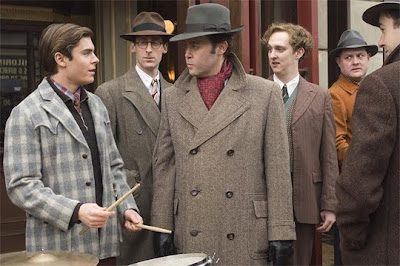 Zac Efron and Christian McKay in Me and Orson Welles.


Forget the "me'' in the movie Me and Orson Welles: It's Welles who steals the show.


If you've seen Orson Welles in a movie -- and who in their right movie mind hasn't? -- you'd have to wonder whether any actor successfully could play the genius director of Citizen Kane and founder of the vaunted Mercury Theater. Before seeing Me and Orson Welles, I'd have bet against any actor who had the nerve to take a sustained run at a figure as out-sized as Welles.
As it turns out, I would have lost my bet. British actor Christian McKay nails Welles. McKay not only looks enough like Welles to keep his appearance from becoming a distraction, he sounds like Welles and fills out Welles' personality, which was enormous even before the boy genius of the 1940s, expanded his girth.

The "me" of the movie's title is a high school student (Zac Efron of High School Musical fame) who aspires to be an actor. Efron's Richard Samuels manages to audition for Welles, who's beginning to rehearse his version of Julius Caesar at the Mercury Theater, a 1937 modern-dress production of Shakespeare that many viewed as groundbreaking.

Richard lands a small part in Julius Caesar, and watches as Welles indulges his libidinous appetites while pushing his actors toward a stellar achievement. The bit of Julius Caesar we see near the movie's conclusion might be better than anything in the rest of the film, which also doubles as a coming-of-age story for Efron's Richard
While hanging around Welles' troupe, Richard falls for Sonja Jones, a wily and worldly production assistant played with easy sophistication by Claire Danes.

Based on a novel by Robert Kaplow, Me and Orson Welles seems intent on teaching Richard a life lesson. It's impossible for even a brash young man of talent to pit himself against a titanic personality such as Welles, who's portrayed as a gifted actor, a genius director and a philandering cad.

Those familiar with the Mercury Theater will recognize some of the supporting characters, which include John Houseman (Eddie Marsan), Joseph Cotten (James Tupper) and Norman Lloyd (Leo Bill). Marsan's frequently exasperated Houseman may be the standout here. He tried to keep a grip on the purse strings while Welles pretty much ignored every constraint.

It's incredible to realize that Welles was only 22 when he brought his Julius Caesar to New York. He was still four years away from making Citizen Kane, and already more full of himself than any man deserves to be. But Welles' egotism was matched by his talent. Watching Welles rehearse his actors while offering asides on Shakespeare is worth the price of admission.

Director Richard Linklater (Before Sunset, School of Rock and Waking Life) makes the most of the carefully appointed sets, as well as of the enthusiastic bustle of the theater. But it's McKay's Welles that dominates the generally enjoyable proceedings; McCay's performance can be seen as a brilliant incarnation of a well-known and imposing figure. Like Welles himself, McKay practically dares us to look away.

Posted by Robert Denerstein at 7:15 AM

Bob,
I absolutely agree with your review. McKay is amazing as Welles.

Doing some research on the weelesnet.com website, it appears that Christian McKay is an Orson Welles scholar in his own right. He did considerable research for his performances in the one-man play ROSEBUD: THE LIVES OF ORSON WELLES, and knows a lot about Welles's private and professional life as well.

Thanks much for reviewing this film.
-- Keith West