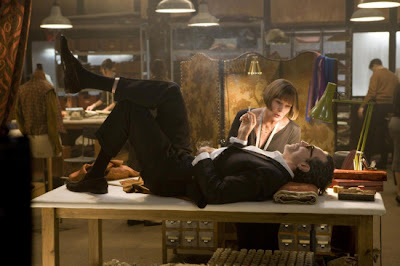 Hey, I've got a great idea for a film. Why not focus on a gifted director who has hit a spirit-stifling bad patch? After many great (and I mean truly great) movies, our director seems to have run out of creative steam. To make matters worse, his last few films were outright flops. Let's make him Italian, which could mean that he's having lots of trouble with the women in his life -- wives, mistresses, etc. In short, our hero's totally lost and unable even to fake his own brilliance.

But wait? That movie already has been made. It was called 8 1/2 . Released in 1963, the movie earned an honored place in director Federico Fellini's filmography, a portrait of an artist gone dry. In Fellini's movie, Marcello Mastroianni -- an actor whose exhausted charm always seemed inexhaustible -- portrayed the director.

The point: Some things are best left alone, but no.....

That's one impressive group, but Marshall -- familiar to the world of big-screen musicals from his version of Chicago -- hasn't made a film that's worthy of its talent. A musical without memorable music, Nine seldom catches hold. Making a musical with non-musical talent may not be fatal, but Marshall's movie feels perpetually out of synch, as if it's always running to catch up with itself.

Elegance is not the movie's strong suit. The musical numbers have been inserted into the narrative with all the grace of a rain-soaked farmer stamping mud off his boots. Beyond that, Nine -- which includes black-and-white and color footage, as well as a bit of fantasy -- seems like a mediocre imitation of Fellini.

Day-Lewis seems an unlikely choice to play director Guido Contini, but he stoops, shrugs and mostly pulls of an Italian accent and attitude. Guido may have run out of ideas, but he hasn't run out of women. Fittingly, The movie opens with a musical number that introduces the women in Guido's life -- his muse (Kidman), his wife (Cotillard), an admiring journalist (Hudson), his mother (Loren), and a costume designer who's working on his new movie (Dench). When it comes to women, Guido is so busy, he needs a scorecard, and so -- at first -- do we.

Nine takes place partly in Rome, some of it on a vast soundstage at Cinecitta Studios where Guido is preparing his next film, a massive project called Italia. The only trouble: There's no script for the movie, and Guido has no idea how he's going to pull a film out of the tumult that surrounds him. He's not sure he can keep bluffing -- at press conferences or with the large crew that awaits the maestro's command.

Wishing to escape the pressure, Guido retreats to a spa, but instead of finding peace, he discovers more chaos. His mistress, the entire film crew and then his wife follow in hot pursuit. What's a poor, harried artist to do? Talk to a cardinal? Try to juggle his time between an increasingly disgusted wife and a demanding mistress?

The actors -- few known for their musical accomplishment -- do reasonably well with the movie's singing chores, but -- in truth -- they don't have much with which to work. I felt sorry for Dench, who must sing a ghastly number called the Folies Bergere. Happily, she emerges with her dignity in tact. In a movie not given to understatement, Cruz swings for the rafters as Carla, Guido's sexy mistress. Marshall approaches Cruz's number as if its sole purpose were to film Cruz's body from every conceivable angle. Say this: It takes your mind off the lyrics.

At times, the movie tempers its melodrama with an antic spirit, but Nine's only real moment of delicacy comes at the very end. Before that, boisterous music -- most with a generic Broadway ring -- mocks most attempts at sophistication.

I have no idea whether Nine will connect at the box office. It certainly has enough star power to sell tickets. But Nine is a movie full of hyperventilated editing, exaggerated energies, faux sophistication and unvarnished shtick.

Elaboration would be welcome. I'd love to read a good defense of this dog.