A 'Sherlock Holmes' for action junkies 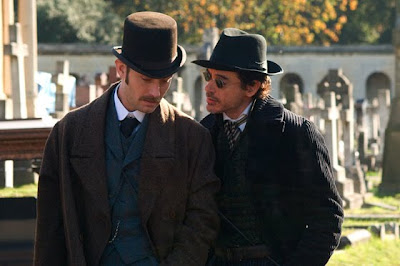 A Watson and Holmes who break with tradition.


When I saw the trailer for Sherlock Holmes, I fell into a mild depression. Director Guy Ritchie -- best known for hyperactive British gangster movies -- seemed to have made Lock, Stock and Pipe-smoking Sherlock, a movie that turned the world's most cerebral detective into an action junkie. Ritchie's Sherlock Holmes looked as if it would flex enough cinematic muscle to start Sir Arthur Conan Doyle spinning in his grave.

After seeing the movie, I have to say that my fears were only partially justified. Sherlock Holmes is better than I expected, even though it boasts many overblown bursts of action, even though its story involves a secret society that might feel right at home in a Dan Brown novel and even though Ritchie fills in crucial narrative gaps with quick flashbacks that hit the screen with the force of a bandage being ripped off a fresh wound.


If you're a Holmes purist, you'd best stay home. Ritchie's movie doesn't quite leave us with a Sherlock in name only, but it's a long way from the Holmes and Watson created by Basil Rathbone and Nigel Bruce in the 1940s and perhaps an even longer way from the Holmes who occupies digs at 221b Baker Street and still lives in readers' imaginations.

At times, Sherlock Holmes looks like a standard-issue buddy picture -- full of bickering and banter between Holmes (Robert Downey Jr.) and Watson (Jude Law). Law's Watson seems to have grown more assertive, too. Freshly insulted, an aggrieved Watson hauls off and punches Holmes in the face. In fact, many punches are thrown in Ritchie's high-stepping mixture of Holmesian iconography, Wild Wild West gadgetry and CGI-boosted effects.

For all the artificially enhanced action, Ritchie's best special effect is Downey, whose Holmes dabbles in drugs -- or so it's suggested -- enjoys bare-knuckle fighting and leaps to logical conclusions faster than a speeding bullet. (Sorry, Superman.) Downey's Holmes, of course, is not quite a superhero; he's an unkempt and idiosyncratic investigator whose efforts -- at least in this installment -- are devoted to preventing murders and preparing the audience for a sequel.

After the abject and semi-failures of movies such as RocknRolla, Revolver and Swept Away, I was a little surprised to learn that Ritchie had been handed the keys to a major and potentially lucrative Hollywood franchise. For the most part, Ritchie serves the narrative, an eclectic hodgepodge that evokes Doyle's creation, as well the ghosts of blockbusters past.

The movie's secondary characters are all a bit limited. Inspector Lastrade (Eddie Marsan) doesn't have that much to do. Rachel McAdams appears as Holmes' slightly compromised romantic interest. McAdams' Irene Adler -- inspired by a character from the Holmes' stories -- looks as if she'll be around for future movies. For his part, Watson is about to take up residence with his fiancee (Kelly Reilly). Holmes isn't happy about losing his companion.

A chilly Mark Strong provides the villainy in this installment. As the scheming Lord Blackood, Strong must look sinister, speak softly and glare when called upon. Lord Blackwood, we quickly learn, is behind a series of brutal murders that present Holmes with enough of a challenge to hold his attention.

Somehow, this teeming movie -- hobbled as it is by a second-rate plot -- crossed the finish line without rousing my ire. A final sequence on London's Tower Bridge -- then under construction -- offers a bit of vertiginous amusement. And Downey, whose mind moves as quickly as a pair of darting eyes, conveys intelligence even during the movie's most preposterous fights.

If I were an optimist, I might be tempted to suggest that Ritchie's Sherlock Holmes will encourage a new generation of readers to seek out the detective who proved that the brain was indeed mightier than the sword. But I don't think that will happen because in this edition, Holmes' actions speak louder than his words. Every punch is amplified. Every explosion has been cranked to ear-splitting volumes, and every repulsive 19th Century London sight -- rats, for example -- has been given a magnified ugliness.

You get the idea; I was able to overcome my initial bias and go along for the souped-up ride. You'll have to make up your own mind whether Ritchie's Sherlock Holmes is a spirited re-imagining, a brutal desecration or -- as I concluded -- something that falls between either of those sharply defined poles.