'It's Complicated,' luxurious and funny 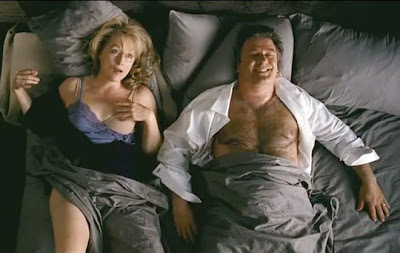 Sometimes it's not easy to look your best.

After a year in which The Hangover seems to have been anointed as one of 2009's top comedies, Nancy Meyers' It's Complicated may be the closest we get to a grown-up antidote. Meyers' movie relies on an improbable contrivance and it's a little too soggy when it comes to drama, but the movie allows Meyers (Something's Gotta Give and What Women Want) to do what she does best: present well-upholstered comedies that balance prosperity and discontent. One thing's sure, when a couple in a Meyers' film breaks up, there's plenty of property over which to fight.


It's Complicated begins long after any such martial haggling has stopped. Meryl Streep plays Jane Adler, a woman who has been divorced for a decade. At a party, Jane -- who runs an upscale Santa Barbara bakery -- runs into Jake (Alec Baldwin), her former husband. An attorney by trade, Jake's carting around his bossy trophy wife Agness (Lake Bell) and her bratty son Pedro (Emjay Anthony).

When Jane and Jake meet again in New York at their son's college graduation, they rekindle an old flame and the movie unveils -- perhaps a little too quickly -- its central conceit: The married Jake -- a man who's always had a roving eye -- casts his ex-wife in the role of his mistress.


No character in It's Complicated needs to pinch pennies. Jane's sprawling Santa Barbara home is enough to make you want to seize the property of the rich. Meyers' apparent devotion to conspicuous materialism has caused some critics to turn up their noses, but Meyers' brand of escapism allows for both fantasy and comic concentration. Her characters are free to worry only about relationships; they needn't fret about where the next latte might be coming from.


Streep's Jane isn't entirely satisfied with her role as mistress, so the script graciously provides her with an attractive alternative. Jane's been planning an addition to her house, a plot twist that brings her into contact with a recently divorced architect (Steve Martin). He's interested in her; she's interested in him, but she's also in the middle of an affair with her paunchy but perpetually libidinous ex-husband.


By now, just about everyone knows that Baldwin is a fine comic actor. The guy's ability to blend happy insensitivity and mild (very) self-awareness always makes me laugh. Martin, also known for comedy, plays his role fairly straight, although he's at the center of one of the movie's more amusing bits: Martin and Streep revisit the '60s, getting stoned on pot and trying to suppress their giggles in the middle of a social gathering.

Streep? Even as a rejected and somewhat insecure wife, she remains a diva, and the giddiness she brings to the role of Jane threatens to go over the top, particularly in the movie's early stages.


Meyers does better with the movie's comic moments than with its attempts to get serious, but It's Complicated succeeds as frothy comedy.

And, yes, after Julie & Julia and It's Complicated, Hollywood owes Streep a movie in which she can stay out the kitchen.