In this movie, speed is the message 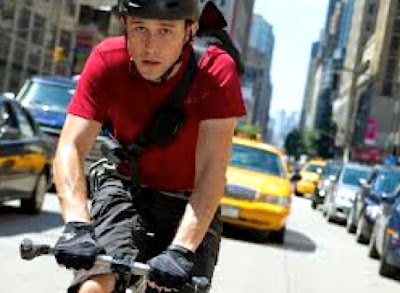 Wilee (Joseph Gordon-Levitt) rides a bike with no brakes and no gears to shift. He's a minimalist who works as a bicycle messenger in Manhattan, which means that he's adept at dodging the city's omnipresent taxis, as well as every other form of vehicular transportation. Wilee's also the main character in Premium Rush, a smartly paced and entertaining movie in which speed, danger and stunts are hung on a plot that's built around one of Wilee's assignments. As the movie progresses, director David Koepp works in Chinese gambling dens, an immigration scheme and a very corrupt cop, played with bizarre relish by Michael Shannon. At heart, Premium Rush is a chase movie, but Koepp has fun with graphics, using them to show us how Wilee thinks through the complex maneuvers required to move around jammed city streets. Koepp, who has written action movies such as Mission Impossible, The Lost World: Jurassic Park and Spider-Man and who has directed movies such as Ghost Town, mounts the action with sharpness and clarity. As Wilee furiously pedals to complete his task, Koepp fleshes out the story by moving back and forth in time. Gordon-Levitt infuses Wilee with just enough character (no desk job for this bike jockey) to avoid becoming a cartoon. I've read that the bike riding stunts are real and have not been digitally created, another ploy that helps distinguish Premium Rush from the rest of the breathless genre movies that whiz by during the course of a summer.
Posted by Robert Denerstein at 8:00 AM