This exorcism is strictly kosher 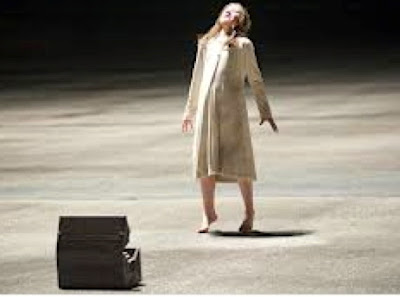 Although exorcism movies have turned into a hefty genre, there's still no better example of the breed than The Exorcist, William Friedkin's 1973 adaptation of William Peter Blatty's novel of the same name.

I say this having just seen The Possession, the latest movie to tell a story about a child who has been possessed by an evil spirit.

The Possession, you should know, is an exorcism movie with a difference. Rather than having the usual collection of Roman Catholic priests show up to battle evil, it falls to a Hassidic Jew to exorcise a dybbuk, a demon that lives in something called a "dybbuk box," an artifact bought for the soon-to-be-possessed girl at a garage sale.

The movie begins with a title card telling us that it's based on a true story. I leave it to you to decide what you think about that, but I'll tell you this: When it comes to exorcism movies, the Catholics have the Jews beat. No contest.

I'll take Max von Sydow and Jason Miller sprinkling holy water over Linda Blair, and pass on Matisyahu -- a Hassidic reggae musician -- who plays a devoutly Jewish man whose body rocks in furious prayer as he tries to expel a demon from a 10-year-old girl (Natasha Calis).

But I'm getting ahead of myself.

Calis's Em is the youngest daughter of a basketball coach (Jeffrey Dean Morgan) and his former wife (Kyra Sedgwick). One day at a garage sale, Em is attracted to an odd wooden box with a Hebrew inscription carved into its lid. Dad buys the box for her. Em brings it home, and begins to exhibit all sorts of crazy, violent behavior.

Sedgwick's character -- who's now dating a dentist -- blames her daughter's descent into weirdness on her ex-husband. But Dad arrives at the uneasy truth: His daughter has been possessed. An older daughter (Madison Davenport) is pretty much irrelevant to the proceedings.

Hebrew inscription aside, at this point I have to admit I was waiting for a slightly skeptical but nonetheless sympathetic priest to show up and bring this hunk of somber horror to its effects-spewing conclusion.

But here's where The Possession tries to make its mark. Dad travels to the Borough Park section of Brooklyn to seek the help of Hassidic Jews, some of whom evidently know a thing or two about exorcising dybbuks.

At this point, Matisyahu enters to the movie, and I began to realize that there was only one man who could give this material its due, and it wasn't Ole Bornedal (Nightwatch), the director charged with putting The Possession through its paces.

Unfortunately, the 15 people who - according to IMDb -- took producing credits on The Possession didn't see fit to hire Mel Brooks, so we're stuck with a movie that takes itself very seriously.

Known for his work on TV's Grey's Anatomy, Morgan does his best to portray a sympathetic father who's desperately trying to save his daughter. Sedgwick spends most of her time fuming at Morgan's character, who -- at one point -- is wrongly accused of abusively beating his daughter.

Not that Calis doesn't take a beating. As the movie progresses, she's attacked by large, ugly moths, sees a hand protrude from her throat and begins to look as haggard as any 10-year-old with heavy make-up can look.

In the end, the movie's Jewish tilt isn't enough to ward off Bornedal's approach to horror, which pretty much sticks to attempts at providing the audience with jolts of one sort or another.

But now, a confession: Any movie that figures out how to bring a Jewish exorcist, a college basketball coach, and his former wife and kids into the obscure corner of a hospital to conduct a ritual exorcism deserves at least grudging respect. The Possession seems clueless about its own outlandishness -- and, at least for me, was all the more enjoyable for it.

One more thing: If I had known about this kind Jewish hookey-dookey years ago, I might have paid a little more attention in Hebrew school.