The complex life of an aging writer 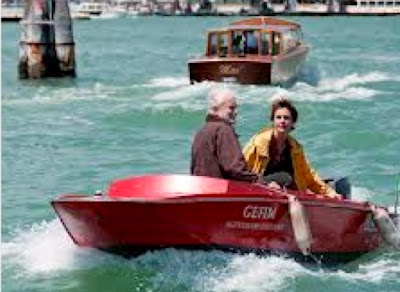 Watching Unforgivable -- a new movie from French director Andre Techine -- puts one in mind of the pleasures that derive from immersion in the work of someone who directs with urgency and assurance.

Unforgivable, Techine's 19th film, finds the 69-year-old director (Wild Reeds and The Girl on the Train) in fine form as he tells the story of Francis (Andre Dussollier), a novelist who has traveled to Venice to write. As the aging Francis searches for living quarters, he meets and marries (impetuously it seems) an attractive young real estate agent (Carole Bouquet).

In more or less breathless fashion, Techine -- who co-wrote the screenplay with Mehdi Ben Attia from a novel by Philippe Djian -- introduces a variety of other characters, all of whom begin to figure in the story.

A sampling: On the advice of Bouquet's Judith, Francis tries to persuade a private investigator (Adriana Asti) to search for his grown daughter Alice (Melanie Thierry), an actress who may have vanished with an impoverished aristocrat (Andrea Pergolesi) who supports himself by selling drugs and dabbling in art forgeries.

Later, Francis hires a young man (Mauro Cante) to trail his wife, whom he suspects of having an affair. To add even more complexity, this young man -- recently released from prison -- is the son of Asti's character, a lesbian who once had an affair with Judith.

This brief synopsis only begins to describe the layers of connection among the movie's characters, all of whom get their due by the time the movie ends.

Techine likes to move quickly, not worrying about dotting every "i" or crossing every "t." For me, he succeeds in establishing a world populated by characters who are living with a sense of elasticity. French characters are living in Venice, where they mingle with Italians. Relationships tend to shift, as do the languages the characters speak.

Techine is onto something with a story that refuses to take root, skimming through situation after situation in ways that prove intriguing. Unforgivable is a movie full of glancing blows and sudden insights.

A superb cast abets Techine in his efforts. A greying Dussollier plays a character who seems to be creating complexities in life that he's currently unable to imagine on the page. He's suffering from writer's block. And there's an emotional coolness about Bouquet that serves her character well.

Unforgivable may extend a bit too long, and it's not necessarily the most profound of movies, but its pulse carries us along as surely as the small boats that transport these characters from the island where Francis has rented a home to the city where Judith works.

More important, Techine understands personal complexity and emotional entanglement. Or maybe it's more accurate to say that he knows that such matters often can make understanding nearly impossible.