Love, class and exploitation In India 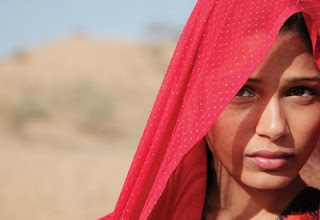 Director Michael Winterbottom (24 Hour Party People) plays an artistic long shot in Trishna, a movie that shifts the location of Thomas Hardy's Tess of the D'Ubervilles to contemporary India. Obviously, such an effort required Winterbottom to play freely with Hardy's story, but he attempts to retain an important Hardy theme: the awful effects of imprisoning social structures. Making effective use of a variety of Indian backdrops, Winterbottom creates plenty of initial interest in the story of Trishna (Frida Pinto), a young woman who falls under the sway of the upperclass son (Riz Ahmed) of a prosperous hotel owner. Ahmed's Jay arranges for Trishna to move from her village to Mumbai, where she begins work in one of the hotels owned by Jay's father. For a time, it seems as if Jay genuinely is smitten by Trisha's plush beauty. But things go desperately wrong as the story chronicles the casual cruelties that begin to surface and enlarge, ultimately defining Jay's behavior toward Trishna. Despite a new buoyancy in Indian culture -- represented by Trishna's exposure to the playful rhythms of Bollywood -- Winterbottom steers the story toward an expectedly tragic result. Trishna may be the title character, but she's also a pawn in a story that, from the very beginning, stacks the deck against her. This may be Winterbottom's point, but instead of breaking our hearts, it puts a bit of a stranglehold on an ambitious but faltering effort.


Posted by Robert Denerstein at 1:26 PM