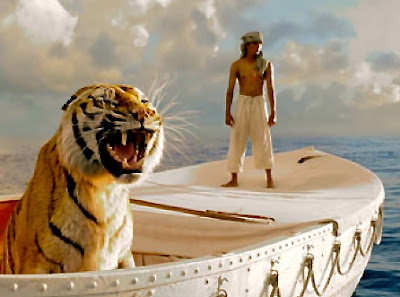 For years, I resisted Yann Martel's Life of Pi, a 2001 novel that I associated with soggy New Age thinking, the kind of spiritual eclecticism that lacks any genuine rigor. I also confess to being puzzled when I read that Ang Lee, a director of diverse interests and previously demonstrated talents in movies such as Crouching Tiger, Hidden Dragon and Broke Back Mountain, planned to make a big-screen adaptation of Martel's novel about a boy who finds himself shipwrecked on a life boat with a full-sized Bengal tiger.

Obviously, neither Lee nor anyone else could have attempted to tell such a story before the advent and continued sharpening of computer-generated imagery. (Lee employed CGI and footage of a real tiger in bringing Life of Pi to the screen.)

To both my surprise and relief, Lee's 3-D version of Martel's novel has moments so magical, they recall the splendid imagery of bygone classics such as The Thief of Bagdad. Life of Pi includes so many dazzling sights (from fanciful to fierce) that it instantly qualifies as one of the screen's bona fide visual splendors.

The story -- told by an adult Pi to a visitor to his Montreal home -- begins by recounting the experiences of Pi's younger days. As a child, Pi grew up in Pondicherry, India. His father owned and operated a zoo, where young Pi learned about animals. These early and highly idealized Indian scenes are entirely captivating and sensual, as if one were inhaling the story through jasmine-infused vapors.

As he grows, Pi becomes interested in religion -- or should I say, he becomes interested in many religions: Hinduism, Catholicism and Islam. He's open-minded about his spirituality, despite the pleas of his rationalist father to settle for one set of beliefs. By believing in everything, perhaps the boy believes in nothing, his father rightly cautions.

Pi's father also teaches his son a lesson about the predatory nature of tigers in a scene that's likely to unsettle younger children; I know it unsettled me. It's a harsh reminder that the natural world, of which we're both a part of and apart from, doesn't always conform to our anthropomorphic expectations.

When Pi's family falls on hard times, Dad decides to sell the animals in Canada. The family boards a cargo ship with the animals, and heads to the new world. When a storm sinks the ship, Pi finds himself sharing a lifeboat with a small menagerie: a vicious hyena, a wounded zebra, an orangutan, a rat and a large tiger named Richard Parker.

For those who are not familiar with the book, I won't say too much more about exactly what happens, but the story forces a resourceful and increasingly battered Pi to learn to live with a wild and often agitated tiger, who just as easily could regard Pi as lunch as a worthy companion.

Suraj Sharma, a non-actor selected by Lee from a field of 3,000 candidates, plays Pi of the lifeboat sequences, really the heart of the movie. The youngest version of Pi is played by Ayush Tandon. The adult Pi, who tells the story, is portrayed by Irrfan Khan. All of them are good, but Sharma had the difficult assignment of acting as if the tiger actually were present. There's a feeling of unstudied realism to his work, as well as a consuming and youthful avidity.

Gerard Depardieu makes a cameo appearance as a cook on the ship that's carrying Pi's family to Canada, but the real stars of Pi are Lee and his technical team. Images of flying fish and of a night sea enriched by the reflection of a million stars have a breathtaking quality that make the movie an enchantment, even during the few moments when it appears to be running out of steam.

Lee's movie relies more on sights than sense -- not necessarily a bad thing for a fable. When Pi and Richard Parker arrive on a remote island populated by meerkats, the movie compounds the exoticism that Lee already has established.

For all its splendid physicality, Life of Pi is also a metaphorical journey into the unknown. Pi grows up in a cocoon of comfort. He adopts many religions. But the storm strips him of the support system he so carefully has constructed (home, faith and family) and brings him into contact with the irreducible and sometimes terrifying primacy of nature. It's not only faith that helps him, but a survival manual he finds on the lifeboat, along with a supply of food and water -- and, just as important, his willingness to look nature in its fierce eye.

The adult Pi begins the story by telling a visitor that the tale he's about to recount will leave the listener (and presumably us, as well) believing in God. I can't say that the movie has that kind of impact because Life of Pi is more about about the role of storytelling in our lives than it is about Pi's spiritual quest.

But however you take the movie's mildly ambiguous ending may be beside the point. You will believe that Pi suffers. You will feel the threatening majesty of a panicky tiger. And, at times, you will see the taunting beauty of the world in which Pi is driven to near despair. You also will feel the disconnect between the imaginatively rich world of Pi's youth and the more constricted world of his adulthood.

At its best, Life of Pi is a genuine wonder -- not because it affirms our spiritual beliefs but because it affirms the power of movies to shatter the daily strictures that govern ordinary life and transport us into worlds beyond what our own experience can deliver.