A great cast does its best to elevate A Late Quartet. 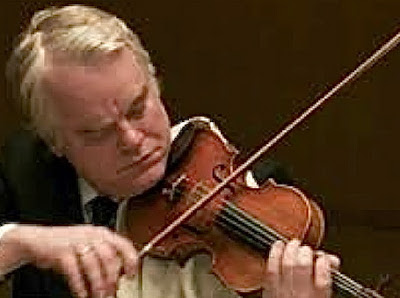 Sometimes I wonder if even Christopher Walken knows where his line readings are headed? Walken, of course, has acquired the reputation of being an actor who specializes in characters who challenge expectation and defy most ideas of normality. But not always. A Late Quartet, a movie about a string quartet that faces a major crisis, provides welcome proof that Walken is not only a highly capable actor, but an extremely sympathetic one. The movie takes the burden of weirdness off Walken's shoulders, something that should come as a relief to both the actor and his audience..

Walken plays Peter Mitchell, the group's cellist and elder statesman. When Peter tells the other members of the unimaginatively named quartet -- The Fugue -- that he has been diagnosed with Parkinson's, troubles begin to threaten the group's 25-year history.

Conflicts quickly arise among the musicians: two of whom (Philip Seymour Hoffman -- as the second violinist -- and Catherine Keener -- as the violist) enter a shaky period in their marriage. To add further complication, professional jealousy starts to poison the atmosphere: The second violinist thinks it's time for him to change places with the first violinist (Mark Ivanar.)

You can tell from a quick perusal of the bold-faced names in the preceding paragraph that A Late Quartet boasts a terrific cast, all of whom are in expectedly fine form.

It's hardly surprising that Hoffman, most recently seen in The Master, gives a strong performance as Robert Gelbart, a husband who believes that his wife, Juliette, is not supporting his quest to play first violin. He's also in conflict with Ivanar's character over the quartet's approach to music, which very much has been determined by the first violinist's highly controlled personality and his preference for technical mastery over free-flowing passion.

The story needed no further wrinkles, but the screenplay has Ivanar's character giving violin lessons to Alexandra (Imogen Poots), daughter of Robert and Juliette. Alexandra harbors a good deal of resentment toward her parents, another dynamic in what turns out to be a script that tries to hit a few too many melodramatic notes.

Director Yaron Zilberman builds the movie around all of these personal tensions, as well as around the group's efforts to master Beethoven's challenging Opus 131.

I know a musician who remained unconvinced (perhaps even bothered) by the fake playing that this talented quartet of actors must attempt. But there's no faulting the cast for the way it inhabits each character.

Hoffman captures Robert's restlessness, volatility and disappointment; Keener excels as a woman who too often has been called upon to become a stabilizing influence on the group; Walken brings a sad sense of resolve to the role of a recently widowed man who's about to lose the skill that has carried him through life. Less well-known than the others, Ivanar more than holds his own.

Zilberman's approach to the material is fairly straightforward, but the screenplay he co-wrote with Seth Grossman, isn't always sure-handed. The story comes dangerously close to farce as the result of an affair that Poots's Alexandra initiates with Ivanar's character.

If you're looking for deep insight into chamber music, you may be a bit disappointed, but the notion that disciplined classical musicians can lead particularly sloppy lives is not without interest, and a screenplay would have to have been awfully bad to defeat a quartet of actors this good.