The Sessions tells the story of a man in an iron lung whose libido has not been paralyzed. 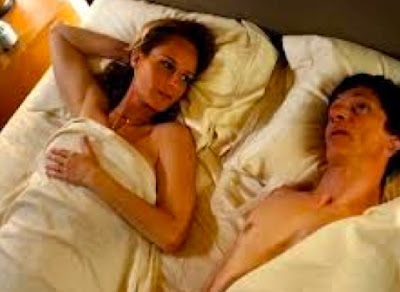 Until his 1999 death at the age of 49, poet and journalist Mark O'Brien had spent most of his life in an iron lung. A boyhood bout with polio left O'Brien without the use of muscles from his neck down. He couldn't breath on his own for long.

In 1997, filmmaker Jessica Hu made a made a documentary about O'Brien, Breathing Lessons: The Life and Work of Mark O'Brien. I haven't seen that documentary, but I have seen The Sessions, an often funny (really) and always revealing account of O'Brien's efforts to have a sex life -- or maybe just to have sex. Not surprisingly for someone in his condition, O'Brien remained a virgin at age 38.

As depicted in The Sessions, O'Brien's interest in sex seems like the most natural thing in the world for a man whose zest life far exceeded the boundaries imposed on him by his iron lung. Always upfront about his circumstances and about himself, O'Brien wrote a magazine article about his sexual adventures. If he felt sorry for himself, he did a good job of hiding it.

John Hawkes (familiar from Winter's Bone and Martha Marcy May Marlene) plays O'Brien, and it may take audiences time to connect this gaunt, atrophied version of Hawkes to any previous images the actor has projected.

If Hawkes is not nominated for an Oscar in the best-actor category, it will go down as one of the great injustices in Academy Award history. But don't think that Hawkes deserves a sympathy Oscar for playing someone with a crippling disability; he deserves an Oscar nomination for creating a memorable character, a man of varied interests (from poetry to baseball) whose desire to experience sex seems like an extension of his curiosity about the world.

In pursuit of his goal, O'Brien contracts for the services of Cheryl Cohen Greene (Helen Hunt), a professional sex surrogate with a husband (Adam Arkin) who knows about her job. That job turns out to be the source of the movie's quietly expressed emotional life. And although Mark and Cheryl eventually must deal with emotions, which always are difficult to sever from physical interaction, The Sessions doesn't hide behind a veil of faux romance.

Appearing naked in many scenes, Hunt portrays a woman who sees her role as that of an educator, teaching her clients the ways of the body with remarkable levels of sensitivity and acceptance. The sex scenes between Mark and Cheryl are frank (he has difficulty not ejaculating prematurely) but never seem distasteful.

For those who somehow wonder about the morality of all this, The Sessions focuses on Mark's relationship with Father Brendan, a priest played with practical intelligence and appropriate discomfort by William H. Macy.

Father Brendan wonders about his role as an adviser in Mark's sexual pursuits, ultimately (and rightly) concluding that although he doesn't believe God condones out-of-wedlock sex, Mark surely qualifies for a pass.

Director Ben Lewin presents Mark's story in straightforward fashion, infusing every scene with believable reactions -- from the clerk at the motel where Mark and Cheryl meet, as well as from Mark's various care takers.

Without shame and with a good deal of courage, The Sessions answers questions that you might think about but would be too embarrassed to ask if you actually met someone such as Mark, who (as you can see from the above picture) was able to spend brief amounts of time out of his iron lung.

The Sessions stands as one of the more intriguing and quietly remarkable movies of the year, as well as a reminder that sexual experience can and should be one of life's joys.