This Must Be the Place hits some wild notes, but never quite finds its niche. 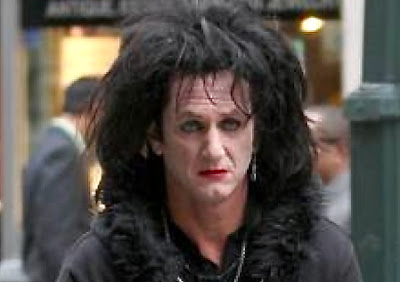 An erstwhile rock star who goes by the name Cheyenne has taken up residence in Ireland. Darkly painted finger nails, red lipstick and tumbling Alice Cooper locks make it clear that Cheyenne clings to his renegade image, even though he no longer performs. In case he needed to seem even stranger, Cheyenne speaks with the fey lilt of a fatigued ingenue.

In playing Cheyenne, Sean Penn often extends his lower lip so that he can blow wayward strands of hair off his face, as if trying to puff away the image that has settled over him. As can be the case with faded performers, Cheyenne is unsure he ever deserved big-time recognition in the first place.

Cheyenne is the main character in the odd, sometimes arresting and often wayward movie, This Must Be the Place, and it's no surprise that he's played by Penn, a daring actor who isn't afraid to challenge himself. Penn incorporates the residue of Cheyenne's former excesses -- a typical trio of sex, drugs and rock 'n' roll -- into the character's every breadth, and gives This Must Be the Place its odd centerpiece.

Director Paulo Sorrentino, who co-wrote the screenplay with Umberto Contarello, doesn't seem to be worried about landing on stable turf. He puts the story in motion when Cheyenne visits the U.S. for his estranged father's funeral and then decides to make a road trip to search for the low-level Nazi guard who humiliated his father in Auschwitz.

This journey -- perhaps a way of connecting with the father he hasn't seen in 30 years -- brings Cheyenne into contact with a gruff Nazi hunter (Judd Hirsch), who tries to dissuade him from any mission of revenge. The man who haunted his father's memories hardly rates a tremor on the Nazi Richter scale, says Hirsch's character.

Disregarding such advice, the creatively spent Cheyenne takes to the road, encountering a series of people relevant to his search, including the Nazi's granddaughter (Kerry Condon). These characters turn up like clues scattered across isolated corners of the U.S., giving the movie the flavor of a typical American indie -- only charged with a sense of surrealism. Indie icon Harry Dean Stanton turns up at a restaurant where Cheyenne makes a stop, further establishing the movie's offbeat bona fides.

Now and again, Cheyenne calls the wife he has left in Dublin, a down-to-earth woman (Frances McDormand) who works as a firefighter in Dublin, the city where Cheyenne has built the mansion in which he lives a life that seems uneventful to the point of vacancy.

Sorrentino, who demonstrates undeniable visual skill, achieves a sense of weirdness without strain, even making room for a cameo from David Byrne, who plays himself, a still fertile musical talent whose stardom, unlike Cheyenne's, didn't lead to a dead-end.

If This Must Be the Place has a subject, it probably has something to do with the ways in which Cheyenne clings to adolescence, a sad man whose perpetual childhood may spring from futile efforts to win his father's love. Cheyenne has all the money he needs, but his life lacks purpose. Still, he's capable of disarming moments of honesty and insight.

It may not matter precisely what This Must Be The Place has in mind or that Cheyenne's confrontation with an aging Nazi is capped with an image of startling -- if self-conscious -- shame. To be honest, I'm not sure what really matters in a movie that wafts its way through 118, often-bizarre minutes, all the while leaning heavily on Penn's performance.

If you see This Must Be the Place, see it for the strange notes that Sorrentino hits in telling a story that tries to scrape the make-up off Cheyenne and return him to the human race.

I'm not sure, but This Must Be the Place stands as one of the year's certifiable cinematic oddities.