This flat has a story to tell

An Israeli discovers a strange chapter in his grandparents' past. 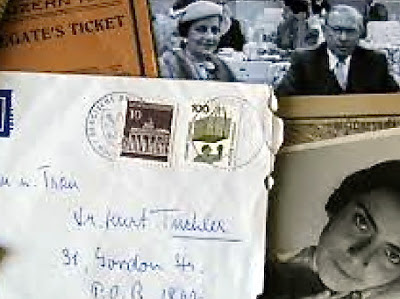 Arnon Goldfinger's grandparents moved from Berlin to Israel during the 1930s, escaping the fate that surely would have awaited them had they remained in Hitler's Germany.

Although Goldfinger's grandparents settled in Tel Aviv, they never totally set aside their identification with the country they regarded as home.

While helping to clean out his grandmother's apartment after her death, Goldfinger discovered a Nazi propaganda sheet that his grandparents had saved. It contained an article explaining that his grandparents -- Gerda and Kurt Tuchler -- once accompanied a prominent SS officer, Leopold von Mildenstein, on a trip to Palestine.

The trip evidently occurred during a moment when factions within the Third Reich were trying to determine the feasibility of deporting Jews to the Middle East, a bizarre situation in which Nazism wondered whether it could make use of Zionism.

Even more amazingly, Goldfinger learned that his grandparents kept in touch with von Mildenstein -- identified by Adolf Eichmann as one of his mentors -- after the war.

This astonishing and frankly baffling story comes to light in The Flat, a documentary made by Goldfinger as he tried to come to grips with a troubling part of his grandparents's past.

We only can guess at the psychological manipulations required for Goldfinger's grandparents to remain in contact with a former Nazi -- even after the Holocaust.
The grandparents evidently didn't discuss such matters with their children. Goldfinger's mother, for example, knew nothing of her parents' strange friendship, if that's what it was. She also didn't know that her grandmother was murdered in Theresienstadt.

Goldfinger and his mother eventually traveled to Germany to meet von Mildenstein's daughter, Edda, an articulate and obviously bright woman who either doesn't know or won't acknowledge her deceased father's entire history.

Goldfinger is a constant presence throughout the film, but he seldom tips his hand about his feelings, allowing the story to emerge as one that offers few -- if any -- answers to a profoundly disturbing question about how two Jews negotiated what must have been some very murky philosophical and moral waters.

By turns fascinating and unsettling, The Flat shows how difficult it must have been for certain people to give up a cultural identification with Germany that they may have regarded as central to their place in the world.

Goldfinger's grandmother kept a flat full of books (all in German). She read Goethe and other towering figures of German literature. Perhaps she was able to disconnect part of herself from the horrific experiences that engulfed Jews during a war in which Nazi annihilation of Jewry was no small objective. Gerda never really mastered Hebrew, preferring to speak in German.

Goldfinger's movie acquires an extra degree of sadness because he had to piece the story together from scraps of information, from conversations with one of his grandmother's surviving friends, from interviews with Germans familiar with the story and from his grandparents' correspondence. The two people he probably most would have liked to interview were no longer around: his grandmother and grandfather. But maybe even they couldn't entirely have made sense of such a confounding story.

Posted by Robert Denerstein at 9:52 AM