Another foray into gangster rot

It's pungent, but Killing Them Softly feels weary and familiar. 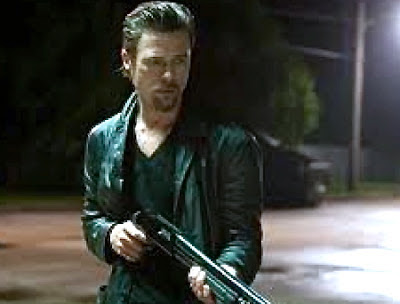 Given the mall-culture perkiness that dominates so much of American culture, it's hardly surprising that filmmakers are attracted to downbeat stories about criminals and crime. Working in the criminal milieu can relieve filmmakers of the pressure to make moral judgments about characters -- or even to fret about how vicious they might become.

In Killing Them Softly, director Andrew Dominik looks for nourishment in the low-life world created by the late George V. Higgins, a novelist who specialized in Boston-based tales from the low end. Director Peter Yates adapted Higgins's The Friends of Eddie Coyle for the big-screen in 1973, giving the great Robert Mitchum one his best roles -- and that's saying something.

Now, Dominik (The Assassination of Jesse James by the Coward Robert Ford) has updated Cogan's Trade, a 1974 novel by Higgins. Setting the story at the tail-end of the 2008 presidential campaign and in the middle of the fiscal meltdown that's still shaking the economy, Dominik moves Higgins's characters to the shabbiest parts of post-Katrina New Orleans.

Dominik's adaptation also tries to mount a critique of American capitalism, complete with a riff about the hypocrisy of a slave-owning Thomas Jefferson and the audacity of politicians (in this case, President Obama and John McCain) who try to portray the U.S. as a community of folks pulling together in common cause.

Bullshit, says Dominik's movie -- and it says it loudly.

In fact, Dominik delivers the message so directly that watching the movie might put you in mind of reading a book that's already been underlined by the time you get hold of it.

Hey, I'm as open to capitalism bashing as the next guy, but Domink's attempts to link the fiscal crisis to mob mores -- or the lack of them -- struck me as simplistic and hollow. The idea, I suppose, is to find some sort of equivalence between the big-time mainstream economy and the brutal shadow economy in which small-time criminals operate.

Drably shot and evoking the storytelling structure of Quentin Tarantino (particularly Pulp Fiction), Killing Them Softly punctuates its gangster talkfest with bursts of violence as the various characters betray one another in plot twists based as much on how people perceive reality as on what's actually real, another theme the movie explicitly states.

Stories such as this don't really need much by way of stylistic embellishment, but Dominik puts his stamp on the material anyway. A slow-motion assassination is set to the strains of Love Letter Straight From the Heart, not the last time that music is used to create an ironic counterpoint to the action. Same goes for a steady stream of TV and radio newscasts that become as monotonous and annoying as yellowing wallpaper in a cheap hotel room.

The story begins when a former felon (Vincent Curatola who played Johnny Sac in HBO's The Sopranos) devises a scheme in which a couple of dim-witted thugs (Scoot McNairy and Ben Mendelsohn) are asked to rob a card game run by Markie Trottman (Ray Liotta). Markie once arranged to have one of his own games robbed, but made the mistake of boasting about it. Curatola's Johnny Amato believes that Markie automatically will be blamed for the heist, thus providing a risk-free opportunity for enrichment.

The robbery -- one of the slowest and most protracted I've seen on screen -- sets off a string of gangster machinations that center around a white-collar mob rep (Richard Jenkins) who asks a cunning hit man (Brad Pitt) to clean up a variety of messes caused by the robbery.

Pitt's Jackie Cogan decides he can't do all the dirty work by himself, so he calls for help in the person of Mickey (James Gandolfini), a hit man who's not at the top of his game. Instead of taking care of business, Mickey spends his time drinking and whoring or telling stories about problems with the wife who keeps serving him with divorce papers.

There are funny, pungent touches here, including a bit about dognapping. Too bad, that oddball crime turned up earlier this year in Seven Psychopaths, but still...
Look, Pitt has de-glamorized himself before. Gandolfini has a nifty monologue, but putting him in any mob movie can't help but evoke memories of Tony Soprano. In general, the actors seem committed in a dreary sort of way that fits the movie's bleak settings.

Although Higgins arrived early on the low-life scene, his successors have made this kind downbeat approach a little too familiar, and it might have been nice had Dominik generated a little suspense about what was going to happen next.

From the moment Johnny Amato proposes robbing Markie's card game, it's apparent that nothing good is likely to result. And by the time, Pitt's character delivers the final bit of dialogue -- the bitter pill the movie has been waiting for us to swallow -- it feels more like a punchline than a dramatic conclusion.