Another day, another 'Die Hard'

A strong-performing series seems to have lost most of its cleverness. 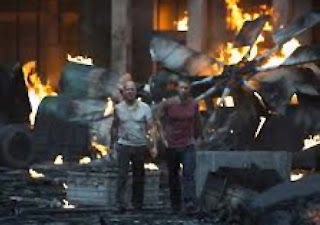 A Good Day to Die Hard, the fifth movie in the Die Hard series that kicked off with style and high tension in 1988, suggests that Bruce Willis -- like Arnold Schwarzenegger and Sylvester Stallone -- won't surrender his action-movie cred without a fight -- in fact without lots of fights.

Throwing plausibility to the winds, A Good Day to Die Hard brings a steady spew of cartoonish violence to Russia, where Willis's John McClane joins his estranged son (Jai Courtney) in a battle to head off a possible terrorist threat -- or something like that.

Ripe with dimly written father/son banter, Willis's one-liners (a repeated assertion that he's on vacation, for example) fall flat, and when McClane finally gets around to his signature "Yippee Ki Yay" line, even Willis seems to have lost interest in trying to put some real punch into it.

Rather than develop a credible plot, director John Moore (Max Payne) invests his energy in a cascading series of action set pieces that are as notable for their noise as for the finesse with which they're executed. In Moore's hands, the action has the jarring blatancy of a car crash, which may be precisely what genre fans crave, particularly in an obvious piece of Valentine's Day counterprogramming.

Moore wastes little time getting started. As soon as McClane arrives in Moscow, he's involved in a clangorous chase sequence that hits the city with wrecking-ball force. And it's hardly surprising that before the movie's done, Moore has broken out enough artillery to arm several small countries.

The movie tries for a little emotion with a woeful father/son reconciliation that follows McLane's admission that an over-emphasis on work caused him to neglect his son's formative years. The neglect doesn't seem to have had much effect on Courtney's Jack McLane, a CIA agent who's referred to by his skeptical father as the "007 of Plainfield, N.J." Dad arrives in Russia hoping to find out what's going with his supposedly wayward son, and doesn't learn that Jack's in the CIA until the action is well underway.

Jack's mission: To smuggle a man named Kamarov (Sebastian Koch) out of the country, along with a secret file. The imprisoned Kamarov has been set-up by another Russian (Sergei Kolesnikov). Although the story boasts a few more twists, none of them come as much of a surprise.

Aside from a cameo appearance by Mary Elizabeth Winstead (as McClane's daughter), Yuliya Snigir, who plays Kamarov's daughter, provides the only other female presence.

A Good Day wrings most of the cleverness and suspense out of the series, substituting as much brashly stated action as it can find. The movie is all pulse and no smarts, the father/son theme falls flat and explosions serve as blaring punctuation marks in a story that eventually finds its way to the ruins of Chernobyl.

If I had to guess, I'd say that A Good Day to Die probably will out-perform Schwarzenegger's recent The Last Stand and Stallone's Bullet to the Head, and it does take a bit of twisted imagination to set some of the action in a place as ravaged as Chernobyl and make it worse.

But based on A Good Day to Die, I'd say it's past time for Willis to put McLane to rest. It's not only the weapons in A Good Die to Die Hard that fire automatically, so -- for the most part -- does this rampaging blur of a movie.