Oscar docs not short on emotion

Don't let this teen-ager's smile fool you, the Oscar nominated shorts contain lots of tough material -- and a fair measure of inspiration, as well. 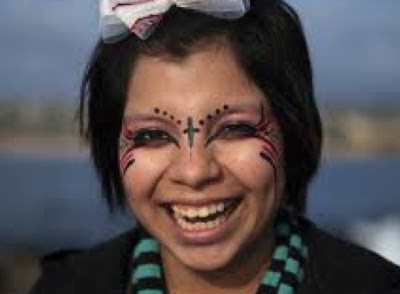 If you're looking for an emotional workout, you'd be hard pressed to do better than the five documentary shorts that have been nominated for this year's Oscar. From the loneliness of aging to the difficulties of coping with breast cancer to problems faced by the impoverished in New York City, the five nominated shorts are as emotionally demanding as they are rewarding.

Although these movies don't qualify as standard-issue escapism, they make for an involving look at issues that shouldn't be ignored. And at least two of the films -- Inocente and Open Heart -- are not without inspirational uplift.

Because each of the films averages about 40 minutes in length, the program runs long. All five films will show in one program at the Sie FilmCenter, making for a three-hour and 26-minute viewing time.

Here's quick look at all five:

Kings Point. Director Sari Gilman takes a refreshingly clear-eyed look at a Florida retirement community where a variety of refugees from New York City are living out their golden years. At first, it seems as if Gilman's movie is going to be a real-life version of a Seinfeld episode. But as the movie progresses, it develops a sad undertow. The people in Gilman's film face the problems of aging with equal amounts of determination and resignation and -- at least in one instance -- plenty of spunk.

Mondays at Racine. Director Cynthia Wade follows a group of women who are struggling with breast cancer and related issues. Wade finds a focus for her film at Racine, a Long Island salon that sets aside the third Monday of every month to help cancer patients dealing with hair loss as a result of chemotherapy. The movie shows how cancer can fracture a marriage, but also introduces us to a family that bravely copes with possible loss. Psychologically astute and undeniably moving, Mondays at Racine, affirms the importance of shared experience while pulling no punches.

Inocente. Directors Sean Fine and Andrea Nix tell the story of a homeless San Diego teen-ager who finds salvation in art. Inocente is at once a story of a trauma and triumph, a look at how a young woman survives a family broken by an abusive father. Inocente, who likes to paint her face, as well as canvases, paints her way into an art show, and, more importantly, develops a powerful sense of self.

Redemption. No this is not a religious documentary. Directors Jon Alpert and Matthew O'Neill document the lives of unemployed New Yorkers who have turned to redeeming cans and bottles for small amounts of money. Redemption offers a fascinating look at people on society's fringe, all of them engaged in an exhausting scuffle to survive.

Open Heart. If you're a kid with heart disease in Rwanda, you'll probably have trouble finding help. Director Kief Davidson introduces us to eight Rwandan children who are fortunate enough to be flown 2,500 miles to the Sudan, site of the only cardiac surgery hospital available to them. These young people travel with Rwandan translators, enduring separation from kith and kin as tireless doctors and dedicated doctors -- working with inadequate funding -- try to save their lives.