From Siberia -- with happiness 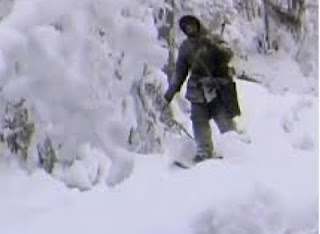 In the popular imagination, few places seem as forbidding and remote as Siberia. Many of us think of Siberia as a place where the banished languish in extreme poverty and numbing cold, an area where the comforts of civilization no longer soothe the troubled spirits of society's outcasts.

Filmmaker Werner Herzog, who always has been fascinated by extremes, finds something unexpected and quite different in Siberia: happiness.

Herzog's latest documentary -- a collaborative effort called Happy People: A Year in the Taiga -- is set in a massive stretch of Siberian land (one-and-a-half times the size of the U.S.) that's accessible only by helicopter in the winter and by boat via river during the summer months.

Herzog shares directorial credit with Russian filmmaker Dmitry Vasyukov, who shot the film's footage for a much longer documentary that played in serialized form on Russian TV. Herzog trimmed Vasyukov's four-hour documentary to one hour and 34 minutes. In the process, he exposes to us to the difficult lives of the hunter/trappers who live in a tiny village in the Taiga.

Herzog and Vasyukov focus on the village of Bakhta, home to hunters who set out in the winter months to trap sable. Although we meet other hunters (including a relative of the late Russian filmmaker Andrei Tarkovsky), Happy People's main character is a bearded, good-humored bear of man named Gennady Soloviev. He becomes our guide through the harsh existence of the Taiga.

Herzog provides a voice-over narration that eventually tips his hand about why he might have been attracted to material that he did not personally film. With the exception of such modern intrusions as snowmobiles and chainsaws, the trappers of Bakhta live starkly primitive lives. They are free and happy, Herzog insists, because they are entirely self-sufficient. For the most part, government is irrelevant to their lives. They catch their own food (mostly river pike), and they know how to survive extreme winters that find temperatures dropping to 40 and 50 degrees below zero.

Happy People should prove fascinating even for those who don't share Herzog's view, which struck me as a slightly romanticized take on lives of incredible hardship -- albeit hardships that the trappers accept voluntarily and which they sometimes seem to relish.

Herzog immerses us in life in the Taiga, illuminating such matters as the relationships between trappers and their dogs. To the hunters, dogs are more than pets; they're allies, hunting partners and companions. Presumably, Soloviev would scoff at the way Americans pamper their pets.

We see the hunters building their traps and constructing the huts that serve as home during their lengthy hunting forays into the forests beyond Bakhta. And however you feel about trapping sable (remember sable fur -- tails specifically -- is used for the highest quality artists' brushes, as well as for coats) you'll likely find yourself caught up in this rough world.

Soloviev himself articulates the ethos of the best hunters, expressing disdain for those who are motivated by greed and who lack of respect for the natural surroundings of the Taiga.

The documentary also introduces us to some of the original inhabitants of the Taiga, the Ket people, a vanishing tribe whose members seem to have lost touch with their own past, sometimes in hazes of alcohol-induced forgetfulness.

For the Russians who live and work in the Taiga, almost everything must be geared toward survival. The village of Bakhta has no telephones. A few lonely street lamps defy the vivid darkness of long winter nights. Summer presents a short window for the cultivation of vegetables.

We owe Herzog a debt of gratitude for discovering this footage and deeming it worthy of global distribution. In our insulated, technology-driven worlds, it's nothing less than chastening to remember how hard much of the world once labored just to survive.

Posted by Robert Denerstein at 10:14 AM