Jason Bateman and Melissa McCarthy in a formulaic road comedy that mines a garbage heap of gags.. 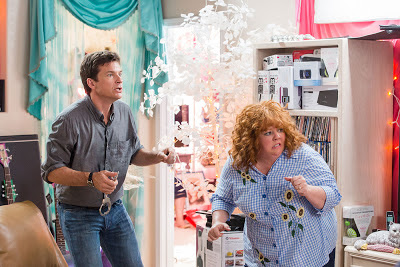 Just when I thought things couldn't possibly get worse or less funny, the abysmally contrived Identity Thief introduced a car chase, a move for which the phrase "insult to injury" surely was invented.

Identity Thief wastes both Melissa McCarthy and Jason Bateman in a road-trip comedy that produces more grimaces than laughs.

Maybe McCarthy (Bridesmaids and This is 40) is best in small doses. Here, she comes close to wearing out her welcome as Diana, a Florida-based thief who steals other people's identities and uses their credit card info to finance wanton spending sprees.

A woeful script has Diana stealing the identity of Sandy Paterson (Bateman), a Denver-based husband and father. Threatened with bankruptcy and the loss of a new job, Sandy decides to travel to Florida to corral his nemesis, bring her back to Colorado and save what's left of his crumbling life and shattered reputation.

Don't ask whether any of this tracks. Like just about everything else in this brashly distasteful comedy, very little makes sense.

You can tell the movie will flounder right from the start. Sandy, who's supposed to be a financial guy, improbably and foolishly falls for an obvious ruse. He gives his name and Social Security number to Diana, who poses as an official who calls to tell him that someone's trying to mess with his credit.

How likely is it that a guy who manages the finances of an investment company wouldn't do a bit of investigating before turning over his Social Security number?

Of course, credibility wouldn't matter if Identity Thief produced sufficient laughs as Diana and Sandy work their way toward Denver.

McCarthy can be very funny, and she certainly knows how to steal a scene, but her one-note truculence gets old when spread over 111 minutes. Poor Bateman. He winds up in the thankless job of straight man, as well as the butt of dumb jokes about his character's masculinity.

Not unexpectedly, this mess of a road trip takes a few sentimental turns that are supposed to make us like Diana, despite the fact that she's a pathological liar and felon.

Vulgar jokes, crashed cars and sentiment? McCarthy and Bateman, two actors who know how to be funny, deserved better.