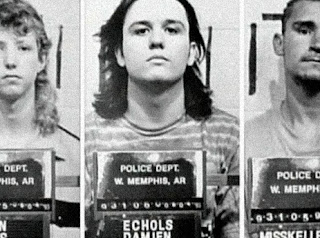 The documentary West of Memphis continues and embellishes work begun by Joe Berlinger and Bruce Sinofsky in their well-received documentary Paradise Lost: The Child Murders at Robin Hood Hills. Berlinger and Sinfoksy followed their initial film with two more documentaries about the gruesome Arkansas child murders. Now comes director Amy Berg's take on the subject, which joins movies such as last year's The Central Park Five in calling much-needed attention to the troubling issue of false confessions. Working with producer Peter Jackson and his partner Fran Walsh (of Lord of the Rings fame), Berg (Deliver Us From Evil) presents a telling and often disturbing look at a case that began with the 1993 murders of three eight-year-old boys in West Memphis, Ark. The murders, accompanied by hideous mutilations, initially were thought to be the work of a satanic cult. Three teen-agers -- Jason Baldwin, Jessie Misskelley  and Damien Echols -- were convicted of a crime that shocked the small community of West Memphis. Echols faced a death sentence, based mostly on a confession by Misskelley, a developmentally challenged young man.  Like its predecessors,  Berg's film does a fine job demonstrating that the three teen-agers were victims of the legal system in which they became ensnared. I won't dwell on details, but know -- as mentioned earlier -- that West of Memphis can be viewed as a harrowing companion piece to Sarah and Ken Burns's The Central Park Five. Although the milieus of the two films differ radically, both deal with what can happen when growing public hysteria conflates with a lust for punishment. West of Memphis is bound to give you pause about abuses in the American judicial system. It's worth noting that Echols, who spent 18 years on death row and who married while in prison, receives a producers credit, along with his wife Lorri Davis. And, unlike the photo above, West of Memphis was not shot in black-and-white.