In The Salesman, director Asghar Farhadi's latest, nothing is as simple as its characters wish. 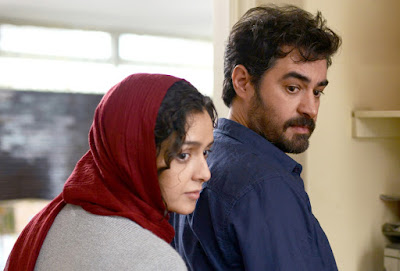 Asghar Farhadi's The Salesman is an Oscar nominee for this year's best foreign-language film. If you've been following the news (and who hasn't?), you already know that Farhadi, an Iranian, would be prohibited from attending this year's ceremony if the seven-country immigration ban instituted by the Trump administration goes into effect. The ban currently is moving through the courts, but Farhadi already has said that he won't attend.

Say this, though. When one of the world's best filmmakers can't attend Hollywood's biggest ceremony, something has gone seriously wrong.

Those familiar with Farhadi's work (Fireworks Wednesday, About Elly, The Past and the Oscar-winning A Separation), already know that Farhadi is a deeply humanistic director who deals with the personal lives of his protagonists as influenced and sometimes constrained by Iranian cultural imperatives.

As if to underscore that point, The Salesman has an American play at its core. An Iranian actor couple (Alidoosti's Rana and Shahab Hosseini's Emad) are staging a version of the Arthur Miller classic, Death of a Salesman. The issues in Miller's play and the issues faced by the characters are meant to mingle in illustrative ways.

The movie begins when the apartment building where Rana and Emad live begins to collapse as a result of nearby construction. The couple must find new digs. Both are in the process of rehearsing Death of a Salesman when one of their colleagues tells them that he knows of a vacancy where they can take up temporary residence.

The former tenant of this new apartment may have been a prostitute, but Rana and Emad know nothing about the previous occupant, except that she's supposed to turn up at any moment to pick up the belongings she has left behind.

A pivotal plot point occurs when a stranger shows up at the apartment. Rana, who's taking a shower, forgets to lock the door, and is assaulted by this stranger. She winds up in the hospital.

This incident becomes the motor that drives the rest of the story. Rana falls into a depression, and Emad feels that his manhood has been challenged. He becomes obsessed with avenging what he regards as an affront to his honor.

Always a nuanced director, Farhadi brings the drama to an intense ethical confrontation that plays out in thought-provoking ways.

Farhadi is too good a director to draw clear-cut moral lines: good, bad, etc. The beautiful Rana is easily damaged. The robust Emad has strong creative impulses, so we're a little surprised to learn that culturally reinforced machismo so dominates his attention. Even the perpetrator of the attack on Rana -- vaguely defined to begin with -- evokes some pathos.

I don't think the movie reaches the level of complexity Farhadi achieved in A Separation, and the connection between Miller's play and the couple's reality makes The Salesman feel less organic that most of Farhadi's previous work. But that shouldn't stop you from seeing a movie about characters who must deal with one another, with their social environment, and, perhaps most importantly, with their flawed but recognizable humanity.

As is the case with many fine movies, you carry these characters forward after the movie's conclusion, knowing that they have been transformed in ways that will echo profoundly in the rest of their lives.

And just to put a cap on this review, one more observation. I would hate to see a time when a director such as Farhadi can't or won't visit American film festivals or accept an American award in person. The shame would be totally on us.