A movie about a comic that's neither funny nor illuminating. 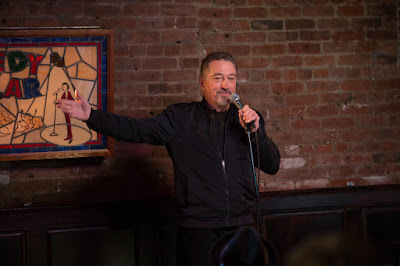 If we didn't already have enough to be depressed about, we can add one more thing to this abysmal winter of teeming discontents.

Robert De Niro has made another movie that probably will disappoint those of us who've been waiting for a great, latter-day return to form from an actor whose recent choices sometimes feel like a betrayal of his talent.

In the new movie, The Comedian, De Niro plays Jackie Burke, a comedian who hit it big with a '90s sitcom. Haunted by the character he once played on TV and unable to build on his early success, Burke has turned into an embittered (and decidedly unfunny) stand-up comic who specializes in insulting any audience has the misfortune of becoming his prey.

Absent the thematic resonance and insight of De Niro's King of Comedy, The Comedian puts De Niro in an awkward position. It's not easy to believe that Jackie has anything resembling worthy comedy chops. We wonder, then, why we're being asked to watch him.

A script credited to Art Linson Richard LaGravenese and Lewis Friedman tries to put Jackie into a variety of situations that illustrate his desperation and persistence.

Director Taylor Hackford (Ray), who may be ill-suited to movies with a sneer, can't make much out of a relationship that doesn't really make sense -- at least in any way that isn't a bit distasteful.

We also are shown Jackie's relationship with his long-suffering but indulgent brother (Danny DeVito), a restaurant owner who serves as an ATM machine for the perpetually broke comic.
Patti LuPone portrays the brother's much less supportive wife.

The big joke that Jackie ultimately unveils centers on a parody of Makin' Whoopee. At a home for seniors in Florida, he offers his mock version entitled Makin' Poopy. Let's just say that this is not a moment of high wit.

It's daring, I suppose, to make a movie about a comedian who isn't particularly funny, but it's not clear whether the filmmakers understand that -- which only makes the movie more difficult to digest.