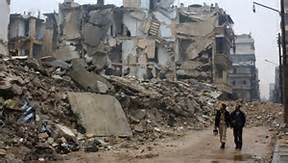 A son's guilt (Borrowed Time), an Algerian man being interrogated by an immigration authority in France (Enemies Within), and Greek Coast Guard workers trying to save Syrian refugees off the island of Lesbos (4.1 Miles) are all part of the amazing spectrum of people and issues highlighting this year's packages of Oscar nominated short films in the animation, live action and documentary categories.

In Denver, the programs are being shown at the Landmark's Mayan Theater (animated shorts and live action) and the Sie Film Center (documentaries). Each program consists of five films.

In my view, the documentary program ranks as this year's strongest entry, partly because three of the films deal with the heartbreaking plight of Syrian refugees. An example: Watani: My Homeland follows a mother and her children from the bomb-ravaged streets of Aleppo to a small town in Germany. White Helmets tells the story of rescue workers who attempt to dig people out of Aleppo's rubble.

The sights in the three documentaries about Syria prove particularly memorable. You'll meet young children so terrorized by bombings that the sound of an airplane is enough to send them into a panic. You'll see brave men risking their lives to save others. You may find yourself moved to tears.

Equally affecting -- albeit for different reasons -- is Extremis, a look at an American doctor dealing with patients facing death. Families agonize about what to do in a film full of caring people who must face moments fraught with wrenching difficulties.

It says something about the severity of this year's documentary entries that Joe's Violin, about a Holocaust survivor who donates a violin to a New York City school program, is the most uplifting of the documentary shorts.

I found this year's animation program to be perhaps the weakest of the Oscar-nominated lot, but that doesn't mean you won't find creativity. Blind Vaysha -- from Canada -- tells the story of a young woman who sees the past out of her left eye and the future out of her right. It may be the most inventive of the animated shorts.

Pear Cider and Cigarettes may remind you of a short story with its focus on the once-promising life of one of the director's most annoying yet irresistible friends.

Also included on the animated shorts list, Piper, a six-minute work from Pixar that's amusing though perhaps more conventional than its competition.

In the live-action shorts category, the Danish drama Silent Nights might have the best chance at landing an Oscar. It tells the story of a Danish woman who strikes up a relationship with a Ghanaian immigrant. Time Code -- about security guards at a parking lot -- contains nice surprises, and La femme et le TGV features Jane Birkin as a Swiss woman who has organized her lonely life around the daily passing of a train.

I'm not going to deep-dive into every film, but offer this brief piece as an invitation to expose yourself to the emotional dynamics of important social issues and to remind yourself that short films are a part of the cinematic vocabulary that you by no means should ignore.