A powerful documentary that's full of a writer's searing truths. 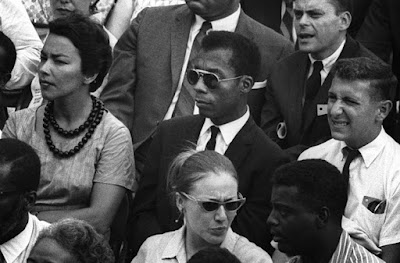 In 1979, the great, sometimes incendiary and often heartbreaking author, James Baldwin, decided that he would study three pivotal lives of the Civil Rights movement. Baldwin planned to write about Medgar Evers, Malcolm X and Martin Luther King Jr., all of whom were murdered and none of whom lived to be 40.

It's shocking to be reminded that Martin Luther King Jr., now enshrined in ageless-icon status, was only 26 when he emerged as a national Civil Rights leader and moral force.

Director Raoul Peck uses elements of Baldwin's writing (beautifully delivered by an off-camera Samuel L. Jackson) to give life to Baldwin's passion, intelligence and insight, often playing Baldwin's words against photographs and news footage that evoke the volatility of a country torn by racism, particularly a South mired in cruel Jim Crow segregation.

As the Civil Rights movement grew more heated, Baldwin left Paris where he'd taken up residence in 1948. He knew he had to return home to pay dues that he was watching others pay. He missed the life that had produced and nourished him, but he also had become a stranger in America.

Peck's movie becomes a kind of blistering diary in which Baldwin assesses his responses to what he saw as a child and what he's rediscovering as an adult.

Baldwin talks about the films he saw as a young man. He despised and feared white heroes who took vengeance into their own hands, as in John Wayne vs. Native Americans. He opines that a black man who sees the world as the John Wayne of popular culture sees it would be deemed a "raving maniac."

Such piercing observations are intercut with a research trip Baldwin took through the South. During those travels, Baldwin saw the line between witness and participant become thinner.

The years covered by the movie were marked by successive tragedies. Baldwin communicates the hollowed out feeling that comes from hearing streams of bad news.

"Medgar, gone," he says after Evers was murdered, a simple line delivered by Jackson with shattering finality.

That's a clue to the sorrow that underlies I Am Not Your Negro, a movie steeped in the pain of loss and the rage inspired by injustice.

As Baldwin says toward the movie's end, "The story of the Negro in America is the story of America. It is not a pretty story."

Baldwin, who died at the age of 63 in 1987, raged at American racism. Today, his voice sounds as powerful as ever. Baldwin reminds us that much of America's economic success was built on the backs of black people, through slave labor and oppression.

Peck uses clips of Baldwin speaking and many well-chosen scenes from movies that prevailed during Baldwin's life as a way of bringing his stunning documentary to its compelling, still necessary life.

I Am Not Your Negro, as much about Baldwin as it is about the men he hoped to study, makes us wish that in our days of turmoil, strife and division, we still had Baldwin's invaluable voice to pierce and illuminate the rancid din.