Love on a South Pacific Island

The Australian movie Tanna has been nominated for an Oscar in the best foreign film category. 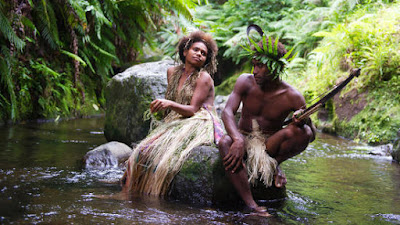 Tanna -- the first film shot in Vanuatu, an island nation in the South Pacific and acted by non-professionals -- caused a stir at last year's Venice Film Festival and has been nominated for an Oscar in the best foreign film category. Both a celebration of indigenous life and a tragic romance, Tanna introduces us to Dain (Mungau Dain) and Wawa (Marie Wawa), a couple from the same small tribe.

Dain and Wawa love each other, but their union is thwarted when their tribal elders offer Wawa in marriage to a warring tribe as part of a much-needed peace settlement.

Additional characters include Wawa's rebellious sister Selin (Marceline Rofit) and Selin and Wawa's grandfather (Albi Nangia). At one point, Grandpa brings the headstrong Selin to the edge of an active volcano, which the people regard as the home of the planet's spirit mother. Grandpa hopes that education in tribal customs will make Selin a bit less obstinate.

Directed by two Australians -- Bentley Dean and Martin Butler -- the movie offers a fair measure of island beauty, and makes it clear that the islanders are defending their way of life by resisting the encroachments of Christian influences. Their numbers are shrinking, but they have no wish to abandon the ways of their ancestors.

Having said that, it also should be noted that Tanna isn't an exercise in voyeuristic exoticism. Credit Dean and Butler with achieving something more: These characters may be living tradition-bound lives, but they emerge as real people rather than as figures in a some colorful diorama seen through prying western eyes.