Those 'nice' folks are plenty scary

Jordan Peele makes his directorial debut with Get Out, a horror movie with a sharp and entertaining satirical edge about racism.. 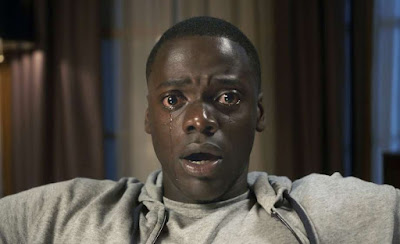 Chris (Daniel Kaluuya) and Rose (Allison Williams) have reached the point in their relationship when it's time for him to meet her parents. Meeting prospective in-laws can be nerve-wracking under any circumstances, but Chris and Rose bring an added dimension to the situation: They're an interracial couple.

Before you start thinking I'm about to tell you about a retooled version of Guess Who's Coming to Dinner, you should be aware that the new movie, Get Out, was directed by Jordan Peele, half of the highly inventive comedy team of Key & Peele.

But don't be mislead by Peele's work on Comedy Central, either. Get Out isn't a comedy, at least not in any conventional sense. It's a horror movie enlivened by a wicked satirical bent and it has something to say about the pressures imposed on black people, often by condescending whites.

When Chris and Rose meet the parents (Catherine Keener and Bradley Whitford), they're greeted by instant acceptance, even though Rose hasn't bothered to tell them that Chris is black. Earlier, Rose had assured a wary Chris that everything would be OK because her dad would have "voted for Barack Obama three times if he could have."

From the start, things seem a bit off-kilter, Whitford's character tires way too hard to show his comfort in the situation, even confessing to some embarrassment about the fact that the family employs two Africa-Americans (Betty Gabriel and Marcus Henderson) to help around the house, one working outside and the other taking care of the kitchen.

This strange pair seems to have arrived from another world, one in which everyone is polite but in a slightly off-kilter way. They're wax-works versions of people, and they seem disassociated from anything that looks either spontaneous or real.

So far, I haven't mentioned anything about the movie's horror aspects, but it's probably best that you discover them in a theater. Be aware, though, not much happens in Get Out that Peele can't shake a bit of thematic resonance out of it.

A high point arises when family friends show up for a party, a collection of white folks who manage to convey a variety of deep-rooted prejudices without breaking stride. And, of course, they seem a bit odd as well, almost parodies of white people.

The only black guest at the party (Lakeith Stanfield) is as strange as the others; he's dressed like a refugee from a country club and accompanies an older white woman.

Much of the movie hinges on Kaluuya's ability to convey Chris's reaction to all the alienating weirdness that he encounters. Kaluuya's performance never sacrifices Chris's dignity or humanity. As a photographer, Chris becomes the movie's eyes. We're seeing the white world from his perspective. It's not a pretty sight.

Signs of looming trouble emerge when Rose's bother (Caleb Landry Jones) shows up, and immediately makes it clear that he's gone over some sort of hostile edge.

To further complicate matters, Keener's character is a psychiatrist who knows how to hypnotize people. Scenes in which Chris falls under a hypnotic spell and free falls through space are rendered in an abstract way that Peele manages to pull off.

Lil Rel Howery hovers around the story's edge, providing the most obvious comic relief. He's Chris's best friend, a TSA agent who -- from the outset -- urges Chris to be suspicious about what he's getting himself into. He's a comic figure, but also the voice of common sense -- and perhaps even conscience.

Because Get Out has no interest in concealing its horror-movie pedigree, Peele can't resist a bit of end-of-picture gore, but there's a satisfying revenge aspect to all the carnage.

Get Out marks Peele's directorial debut; he has accomplished something brave, sinister and stark. Amid the jolts and creep-outs, he has made a perceptive movie about the intermingling of racism and ordinary life.

I suppose you have to have some taste for horror fully to enjoy Get Out, but Peele has served up the season's sharpest hunk of weird fun; by the end, Get Out has turned into a bloody (I mean that literally) good time.