A lawyer takes on a major corporation

Mark Ruffalo stars in Dark Waters, a movie that uses a deliberate approach in creating a drama of betrayed trust. 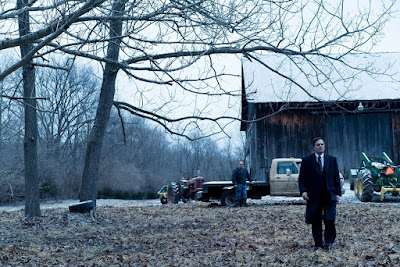 Making a movie about a complex legal case that spanned 17 years can't be easy. Director Todd Haynes and star Mark Ruffalo accomplish the daunting task in Dark Waters, the story of an Ohio attorney who takes on DuPont, one of the world's leading chemical companies.

Ruffalo portrays Rob Bilott, a Cincinnati-based attorney who specializes in defending companies like DuPont. After some initial foot-dragging, Bilott agrees to represent a West Virginia farmer (Bill Camp) whose cattle are being poisoned by toxic waste that has been dumped near his acreage. Bilott's target: DuPont.

Those familiar with Haynes' work (Wonderstruck, Carol, Far From Heaven) know that he can be as much stylist as a storyteller. But here, Haynes works in an unassuming fashion. He's wise enough to know that a story that impacts so many people needs little embellishment.

Dark Waters moves beyond the plight of a single farmer to encompass the drinking water of an entire town. The chemical in question also was used in Teflon, a non-stick coating familiar to most Americans.

Early on, we meet the head of Bilott's law firm. Tim Robbins portrays an attorney who eventually buys into Bilott's mission, a stance that doesn't please all the partners. Some of them view Bilott as a traitor who's biting the hands that feed the firm.

And Tim's wife ( Anne Hathaway impressive in a smallish role) isn't blindly supportive; she resents the fact that the case takes Bilott away from his children.

Among the supporting cast, Victor Garber also stands out as the head of DuPont. Initially cordial, Garber's character turns vicious when his company's interests are threatened.

But it's Ruffalo who carries the movie; he creates a portrait of an attorney who couldn't be less slick. As a church-going ordinary guy, Bilott feels no need to put self-righteousness on display.

Bilott's case against DuPont involves the use of a chemical called PFOA. It takes lots of heavy research to discover what the chemical is and how it has been used. Persistence trumps genius-level legal maneuvers.

You might say that everyone involved with the production -- from cinematographer Ed Lachman to Haynes -- serves a story that rightly has been compared to movies such as Norma Rae, Erin Brokovich and The Insider.

That's not to say that Dark Waters lacks atmosphere. The movie makes its case while capturing the bleak environs of a failing West Virginia farm and the grayness of Midwestern environments that have seen better days.

Basing the movie on a 2016 article that appeared in The New York Times Magazine, screenwriters Mario Correa and Matthew Michael Carnahan do a fine job capitalizing on the inherent drama of a tale involving betrayed trust.

The film reinforces a sobering conclusion: In the end, we can't rely on the government or on corporations for protection. We have to hope that people such as Bilott will take on fights that initially look futile.

Don't expect an explosive movie. Dark Waters gradually insinuates itself into consciousness in ways that make you shudder; it presents a clear case of a company that put its own interests ahead of the general good.