A wild look at an Israeli in Paris 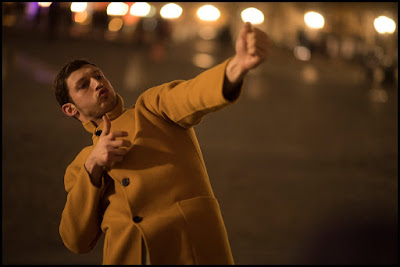 Sometimes a movie needn't make perfect sense. Vitality and a sense of urgent cinematic life also can create works of significance. I say this by way of introducing a review of Synonyms, a movie from Israeli director Nadav Lapid.

At heart, the movie is about one man's conflicted sense of identity. Lapid approaches this subject by following Yoav (Tom Mercier), a former Israeli soldier who arrives in Paris determined to denounce his Israeli origins and become a full-fledged Frenchman.

On the day of his arrival, Yoav finds a spacious, empty Paris apartment, goes to sleep in a cocoon-like garment and awakens to take a morning shower. While in the shower, his belongings -- most importantly his clothes -- are stolen. Naked and cold, he's reborn into his new life.

Early on, Lapid garnishes Yoav's flight from his identity with odd comic flourishes. We're kept off-guard. Are we supposed to take any of this seriously? Is everything we're seeing meant to be taken metaphorically?

Mercier's tense, withholding, and muscular performance heightens the sense of mystery. Mercier makes one thing clear: Getting to know Yoav won't e easy. That doesn't make Synonyms more accessible, but it creates a sense of mystery as we wait for Lapid to supply the narrative beats that will pull everything into sharper focus.

Lapid does and doesn't supply those beats. Mostly, he keeps us in a state of unease, but his filmmaking can be so vital that we're reluctant to cash in our chips and move on.

Early on, the naked, freezing Yoav is taken in by two people who share an apartment in the building where Yoav first staked his claim. Emile (Quentin Dolmaire) is a writer and Caroline (Louise Chevillotte) plays the oboe. They're a couple of sorts, two people sharing an apartment while sustaining a relationship they've only vaguely defined.

They supply Yoav with clothing, notably a stylish, orange coat that he rarely removes as he travels about Paris.

For reasons that are never made entirely clear, Yoav becomes involved with Israelis who are resolved to fight neo-fascists in France. One of them (Uria Hayik) insists on creating bizarre confrontations with otherwise indifferent strangers. He pushes his Israeli/Jewish identity into startled faces, turning his public persona into an act of aggression. I'm an Israeli. I'm a Jew. Now do something about it. He loudly hums Hatikvah, the Israeli national anthem, as he confronts baffled riders in a crowded subway car.

I took this as a way for Lapid to assert another part of the Israeli identity, the part that refuses to wait for anti-Semitism to emerge before confronting it, the part that's been conditioned against any form of passivity in the face of potential victimization.

The movie's title derives from Yoav's habit of walking through the streets of Paris reciting strings of related or synonymous words as part of his effort to improve his French. Yoav's transformation involves an obdurate refusal to speak Hebrew, even to other Israelis. Only French, he insists.

Yoav's life is spartan. He moves into another vacant apartment where he cooks the one meal he eats daily, inexpensive pasta topped with an inexpensive sauce.

How Yoav knows of these apartments never is made clear, although it's reasonable to assume that he has had previous contact with a network of Parisian-based Israelis.

You won't be surprised to know that Yoav's efforts to recreate himself are doomed. But in this wild and eruptive movie, contradictions aren't resolved; they're splayed across the screen in a vibrant, provocative fashion. Their absurdities taunt us.