The fight against a pedophile priest 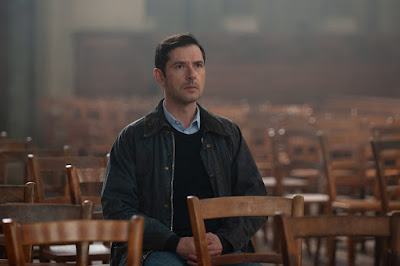 It took me a while to commit to director Francois Ozon's By the Grace of God, a movie about the justice-seeking efforts of a group of men who, as children, had been abused by a pedophile priest. As adults, the men joined forces to seek some acknowledgment of what had happened to them, and, in some cases, to find peace for themselves. Ozon (Double Lover, Swimming Pool) focuses on the French city of Lyon, where the men live. Alexandre (Melvil Poupaud) begins the charge against the priest. Motivated by conscience, Alexandre remains faithful to the church. He and his family are practicing Catholics. As the movie develops, we learn that Alexandre wants to reform the church from the inside. Francois (Denis Menochet) takes another view. He joins the fray as an atheist. He, too, has a family but has given up on the Church. Swann Arlaud portrays Emmanuel, the most damaged of the men. Despite a genius IQ, he has wasted his life in failed relationships and chronic underachievement. Eric Caravaca portrays Gilles Perret, a level-headed surgeon who also joins the group. So why -- given the movie's topicality and the explosive nature of its subject -- did I have initial difficulty getting into the film? At first, By the Grace of God seems as if it's going to be an anti-church procedural. But Ozon carefully lays out the story, allowing its complexities to emerge as the men band together and the story deepens. Representatives of the Catholic Church don't fare well but aren't turned into caricatured villains, either. Francois Marthouret portrays Cardinal Barbarin, a churchman who knows how to be sympathetic while simultaneously doing nothing to address the problem of a pedophile priest. As the priest who abused the boys when they were Scouts, Bernard Verley creates a character who's contemptible and pathetic. The priest admits his wrong-doing but when he meets with any of the adult men for attempted reconciliations, he still seems to relate to them as children. In all, By the Grace of God winds up being about more than child abuse. It's also about the complex group dynamics that develop when victims seek justice and about the lasting impact of one of the most severe of all imaginable betrayals.