An entertaining mystery with a great cast

Knives Out couples a traditional approach with a cast of colorful contemporary characters. 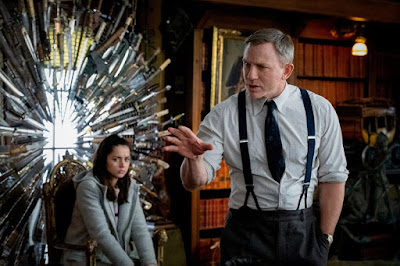 Knives Out, a movie that unashamedly evokes memories of traditional whodunits, begins where it must: A group of disagreeable relatives gather in hopes of inheriting the fortune of the family’s obscenely rich patriarch.

Conveniently, the wealthy head of the family, a mystery writer played by Christopher Plummer, dies on the night of his 85th birthday celebration. Was it murder or suicide?

Director Rian Johnson isn't shy about declaring his intentions. The movie’s production design includes a rather large and prominently displayed collection of knives, part of the decor of the mansion where family members gather to snipe at one another and wait for the writer's will to be read. A greedy, duplicitous lot, the relatives all become instant suspects should it turn out that Plummer's Harlan Thrombey did not depart this life willingly.

To spark interest, the movie plays some intriguing games with casting.

To begin with, Johnson (Star Wars: The Last Jedi, The Brothers Bloom and Brick) gives Daniel Craig an opportunity to break the Bond mold. Craig portrays a private detective with an overdone Southern drawl that sounds as if the actor mastered it by bathing his vocal cords in Southern Comfort. Craig's improbably named Benoit Blanc claims that an unidentified person has hired him to assist the police in an investigation.

Michael Shannon also plays against expectation, stepping out of scary villain mode to play Harlan's pathetically ineffectual son, a man who has spent most of his life in his father’s shadow.

The writer's nurse (Mara Cabrera), an immigrant who's devoted to her boss, might be the lone character without an ulterior motive for wanting to see Harlan end his earthly journey.

Johnson flirts with caricature but a great cast won't let him get away with it. Toni Collette plays the widow of one of the late writer's sons, a woman who operates a company called Flam. The firm's business: the suspiciously broad theme of wellness. Jamie Lee Curtis appears as the haughty Linda, the writer's daughter. She's married to Don Johnson's Richard.

Like everyone else, Johnson’s character has his eye on the late writer's fortune -- as well as on the occasional woman who wanders into his view. He also delivers an anti-immigrant rant that adds a bit of topicality.

Then there's Ransom (Chris Evans), the writer's grandson, a guy who doesn't seem to care about money, but who nonetheless has become pretty good at spending it. In disdaining the rest of the family, the character of Ransom provides Evans with what must have been a welcome chance not to be Captain America.

I doubt you'll leave the theater burdened by heavy philosophical baggage. Most post-movie conversations likely will focus on Johnson's preposterously wily characters and the actors who seem to be having such a good time playing them.

The point here is entertainment and aside from allowing the proceedings to run a trifle long (two hours and 11 minutes), Johnson delivers what Knives Out promises: wry amusement, a mystery resolved at the last moment, and enough snide observation to justify the appropriately caustic treatment these characters so richly deserve.