Ewan McGregor stars in a labored rendition of Stephen King’s follow-up to The Shining. 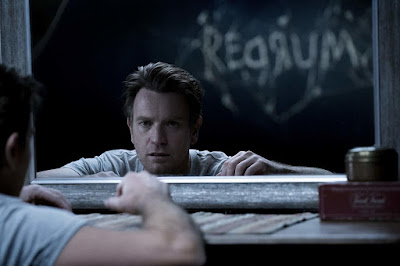 Perhaps as a way of establishing its bona fides, Doctor Sleep makes what struck me as strained references (I'll reveal no more) to The Shining, the movie it follows some 39 years after its release. I won't say more, but I begin this way because, for me, Doctor Sleep stands as an act of imposture, an attempt wring more from a story that already had been told. Of course, it's difficult to call the movie a ripoff: The movie stems from a 2013 sequel that Shining author Stephen King himself wrote.

In this overlong edition — the movie clocks in at 2 1/2 hours — Ewan McGregor plays a grown-up version of Danny Torrance, the kid from the original movie. Adrift in alcohol and dereliction, Danny winds up in a small New Hampshire town, where he joins AA and tries to make peace with the terrifying visions in his head. He receives help from an AA pal (Cliff Curtis) and from his mentor, played in the original by Scatman Crothers and in the sequel by Carl Lumbly.

To give the movie a plot, Danny hooks up with Abra Stone (Kyliegh Currran), a girl who has mighty shining powers; i.e., she can see things in other dimensions and project herself into distant places without leaving her bedroom. She also sees visions that scare her and are supposed to do the same to us.

The dread, in this case, stems from a traveling band of folks led by Rose the Hat (Rebecca Ferguson), a woman whose extra-long life is sustained by sucking the life out of those with the ability to shine. Zahn McClarnon plays Crow Daddy, Rose’s devoted number two.

Lest the supply of demonic fiends runs short, Rose recruits a young blond woman (Emily Alyn Lind to her evil cause. It doesn’t take long for Lind’s character, who's given the charming nickname of Snakebite Andi, to become as bad as the rest of the group.

What any of this has to do with Stanley Kubrick’s 1980 original seems marginal, although by the end, director Mike Flanagan transports the story to Colorado for a big showdown between Danny and Rose at the fabled Overlook Hotel, which like lots of ‘80s real estate, has become a mere shadow of itself. Danny must save Abra and rid the world of this pesky group of soul-sucking demons.

More muddled than the usual King offering, Doctor Sleep can at times seem ridiculous as it groans under the weight of having to connect with its predecessor. The movie's title, by the way, derives from Danny’s ability to help the aging slip gently into death after he lands a job at a hospice. Just like falling asleep he assures the dying.

Stuck playing a character battling his inner demons, McGregor doesn’t do much to fill the movie’s center. Ferguson, embodying a series of adjectives -- sexy, demonic, vicious and snide — deserves credit for hitting the right notes.

I’m not going to belabor this one. Shining fans seeking a second helping probably will give the movie an initial boost, but even diehards will have to admit that Flanagan (Oculus) doesn’t have Kubrick’s visual sense nor can he imbue his movie with the brooding grandiosity that made the original seem like a major movie.

I don’t know if The Shining should be called a classic, but it still has some sway. This one? Just another day at the multiplex — or maybe considering its length, a day and a half.