Ian McKellen and Helen Mirren play a fine duet but an increasingly misguided screenplay lets them down. 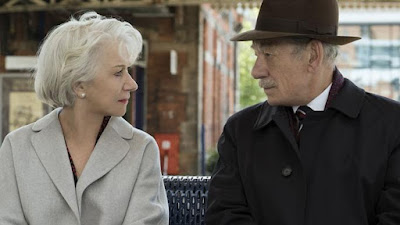 I can’t think of a recent movie that I anticipated with more relish than The Good Liar, a semi-caper entertainment starring Ian McKellen and Helen Mirren. Why not be excited? Finally, I thought, an entertainment aimed at adults and delivered by actors who know how to serve up a line of dialogue as if it were the main course at a five-star restaurant.

So you can imagine the scale of my letdown as The Good Liar began disappearing inside a growing fog of disappointment caused, I think, by an increasingly unbelievable and complex plot that pulls what might have been a crisp entertainment into the deadening swamp of attempted significance.

None of this is to say that The Good Liar, adapted from a 2016 novel by Nicholas Searle, doesn’t include some fine acting. McKellen plays a con man who presents himself as a good-natured Brit — not too smart, pleasant company and just witty enough to keep a conversation rolling.

Mirren portrays a retired Oxford professor who lives in an insufferably bland London suburb in a house that looks as if it had been designed to say ... well ... absolutely nothing

Director Bill Condon makes it clear from the outset that neither McKellen’s Roy nor Mirren’s Betty is on a first-name basis with the truth. Before the opening credits conclude, Condon establishes that both characters are willing to falsify descriptions of themselves on the online dating service where they first encounter each other. She checks the box that says she doesn't drink while sipping from a glass of wine. No smoking, says he, puffing away.

So the question immediately arises, who is trying to con whom and why? It’s a question that has produced reliable entertainment for years, so there’s every reason to expect that The Good Liar will avoid being an exception to the rule.

I’m not going to burden you with the plot because that inevitably would involve introducing spoilers. Let’s just say that the script contrives to have Roy, who feigns injury, move in with Betty. They begin to take on the appearances and habits of a couple -- sans sex.

It doesn’t take terribly long for one of Roy’s felonious associates (Jim Carter) to show up and suggest — ever so cautiously — that Roy and Betty might enjoy a considerable financial advantage should they choose to merge their finances.

As all this transpires, Roy and Carter’s Vincent carry on a complicated ruse in which they bilk unsuspecting investors out of thousands of pounds.

And, of course, we know — simply because Mirren can’t help but project a keen intelligence — that Betty also probably has something up her otherwise unruffled sleeve.

Might it have something to do with Steven (Russell Tovey), a man she introduces as her grandson, a lawyer who makes no effort to conceal his suspicions about Roy?

Eventually, the movie must reveal its secrets, which, alas, challenge credibility. I'll provide a slight clue by telling you that Roy's facade begins to unravel when he and Betty take a trip to Berlin.

These secrets attach themselves to the story, capsizing what should have been smooth sailing toward a rewarding finale, preferably delivered with a garnish of wit.

Alas, Jeffrey Hatcher’s screenplay, which relies on lame flashbacks, has more in mind. Once again, more proves to be less.

Still, there are pleasures here. Mirren suggests much by doing little. When Roy experiences moments of lost control, McKellen’s face collapses. Uncertainty spreads across it like a spot of ink being absorbed into a blotter. And Carter, familiar from Downton Abbey, seems incapable of letting us down.

McKellen and Mirren deserve to be teamed again. We deserve some fulfilling adult entertainment. The Good Liar contains enough promise to keep us from suspending all hope that such mature pleasures someday may arrive — even if, for now, they must be deferred.