'The Irishman' -- stories from a hitman's past

Martin Scorsese, Robert De Niro, Al Pacino, and Joe Pesci have made an epic that reminds us how terrific all of them can be. 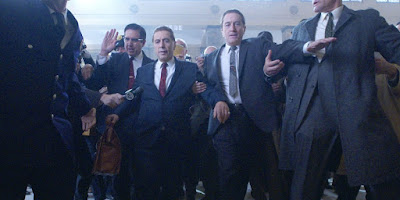 I wondered why, at the end of director Martin Scorsese’s The Irishman, I felt so sad. The movie concludes — and I don’t consider this a spoiler — with an aging union official, who’s also a hitman, contemplating his demise. Shouldn’t I have felt a sense of satisfaction that the inexorable flow of time was about to do to Frank Sheeran, a.k.a., The Irishman, what he had done to so many others?

The reason for the sadness, I think, is complex. It mixes love for the movies of my younger days with the arc of Frank's story. I'm unable to separate the two, so I'm not going to try.

Frank Sheeran first came to light in a 2004 book by Charles Brandt. Titled, I Heard You Paint Houses, the book included the claim that Frank killed Jimmy Hoffa, the Teamster boss who was revered by his membership. (Painting houses evidently is a mob euphemism for carrying out murders.)

For the record — and also in the movie — Frank also said he murdered Joey Gallo, a.k.a. Crazy Joe, a famous mob murder that took place in 1972 at Umberto’s Clam House in Manhattan's Little Italy.

In the movie, Robert De Niro portrays Frank and Al Pacino plays Hoffa. Frank’s closeness to Hoffa made the assassination possible. As someone who seldom seemed troubled by his work, Frank found himself in an uncomfortable position regarding Hoffa. He had to kill a man he admired and with whom he shared a common ethnic background.

Frank’s crime life began in earnest when he met Russell Bufalino (Joe Pesci), a soft-spoken guy who ran a crime family in Northeastern Pennsylvania. Bufalino took a liking to Frank and recommended him to Hoffa, who eventually made him a union official.

When Hoffa tried to reinstate himself as Teamster president after spending time in jail for jury tampering, the mob got tired of his bravado. They wanted him gone. Hoffa didn’t want to be gone. They decided to make him gone.

But the plot and its revelations about corruption, though carefully detailed in Steve Zaillian’s fine screenplay, aren’t at the heart of what makes The Irishman great.

To understand that, you need to understand that Scorsese, who'll be 77 when The Irishman begins its run on Netflix on Nov. 27, has returned to the gangster turf that spawned his signature work. Only this time, like his aging characters, he's moving at a slower pace. The Irishman runs for three hours and 20 minutes -- and, no, it never seemed too long to me.

In The Irishman, Scorsese seems to take less delight in the colorful way his characters speak and in the way their violence can spark a scene. A more deliberate pace takes the Scorsese's characters beyond amusement and, at times, even makes them seem a little pathetic.

The bulk of the action takes place in the 1950s and ‘60s, which enables Scorsese to use lots of period music. He begins with the Five Satins' In the Still of the Night for an opening that finds Frank old and friendless in a nursing home. He begins talking about his life. In The Still of the Night, the background singers chime in with a telling two-word refrain: "I remember. I remember."

The connection to movies proves inescapable. It’s not only Frank who's dying: It’s a certain kind of gangster film; it’s the period in which De Niro, Pacino and later Pesci rose to prominence. The Irishman might be Scorsese’s goodbye to a part of his own big-screen life -- and maybe to his youth.

This is not to say that anyone in The Irishman plans to retreat from the screen. But I can’t imagine that they’ll ever make another film like The Irishman, an epic tale of corruption and color that reminds you that De Niro, who has been in a lot of questionable movies, still can be great, that Pacino’s flare and bombast can imbue a character with brute power, and that Pesci, the movie’s true revelation, can find a quiet resolve in himself, a sense of proportion that allows him to steal the movie. Bufalino asserts his power with a spirit bordering on resignation.

To allow his characters to appear youthful in early scenes, Scorsese employs a de-aging technique that can be a little disorienting, making the faces of his characters look slightly unreal at times. But somehow it works and the acting is so strong that the de-aging becomes part of the atmosphere Scorsese creates, one of estrangement and distance.

At one point, Bufalino and Frank drive across the country with their wives (Kathrine Narducci and Kate Arrington). They're en route to a wedding in Detroit, but the trip really is a cover for something more sinister. The drive crops up from time-to-time as Frank narrates a story full of vividly recalled memories that still feel anchored in the past.

I loved that sense of fading time about The Irishman, which also has plenty of the expected ingredients: violence, bloodshed, and the gangster grit that Scorsese’s moving cameras have been spreading across screens for years.

The Irishman may impress you as somber, particularly as the story nears its resolution. The feeling is reinforced throughout by Frank’s relationship with Peggy, one of his four daughters, played as an adult by Anna Paquin. She knows her father and rejects him. Forget the law. She's his judge.

Peggy and also time. Mobsters, union leaders, violent men, and blowhards are all subject to the same destiny. All of them eventually will die and be forgotten.

Frank doesn’t relish the idea. At one point, he talks to a priest. Frank is too honest to say he feels remorse. He says he feels nothing about the things he's done. One thing he does seem to feel — and De Niro’s performance reflects it — is a reluctance entirely to vanish. Frank wants his body housed in a vault because it strikes him as a little less final than burial or cremation.

It’s the last futile hope of a gangster, the idea that somehow he’ll be able to evade — if only by a shade — the one hitman that can’t be beaten.