A 'Brave' new world for Pixar

Brave finds a female lead, but loses some of the expected magic. 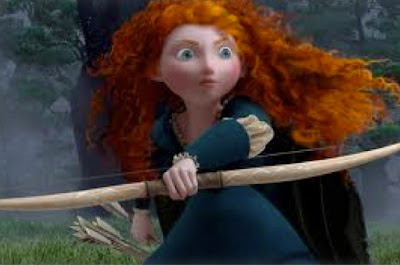 When it comes to wildly successful animation, Pixar's track record is difficult to beat. Pixar films such as Finding Nemo, Up, and Toy Story have transformed the animated landscape, appealing broadly to both adult and kiddie audiences.

Brave, a story centered on a young princess, is a slightly different Pixar animal. It's good enough to attract a crowd, but can't be ranked among the studio's best.

Although all technical aspects are first-rate, Pixar's Scottish-based story feels less committed to off-kilter creativity than previous efforts. Brave seems to have been conceived to celebrate a girl's courage while, at the same time, teaching her a lesson about the perils of selfishness.

The film's early scenes introduce Princess Merida (Kelly Macdonald) and sets up one of the story's basic problems. Free-spirited Merida, who receives a bow and arrow as a birthday gift from her father (Billy Connolly), is being encouraged by her mother Elinor (Emma Thompson) to assume her royal responsibilities; i.e., Merida's supposed to act like a bona fide princess and prepare to marry one of three suitors who'll be competing for her affections at a pre-engagement tournament.

Brave earns comic points with this preposterous trio of suitors, all of them obviously unsuitable for the movie's red-headed main character.

For her part, an adamant Merida insists on maintaining her freedom, which -- as we see -- riding horses through beautifully drawn forests, chasing glowing will o' the wisps and establishing herself as an ace archer and all-around free spirit.

A pivotal plot twist arrives when Merida encounters a witch (Julie Walters) who promises to change her mother's mind, but brings about other changes that burden Merida with a new responsibilities.

Brave plays like a fractured fairy tale with a mild agenda, increasingly becoming a story about the relationship between a determined, conventional mother and her equally determined, but unconventional daughter.

Pixar peppers the movie with enough comic relief to keep kids happy and propel the little ones past a few scary moments, but for all its animated marvels, Brave comes up short in the magic department.