Teaching the young after a tragedy 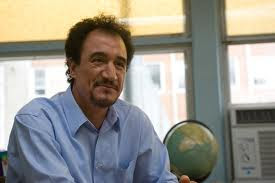 Movies about teachers run the risk of pumping us full of faux inspiration or asking us to wallow in teary sentiment as we bid goodbye to the latest Mr. Chips. Because it does neither of these things and because it features a beautifully calibrated performance by Algerian actor Mohammad Fellag, the French-Canadian film Monsieur Lahzar qualifies as a small wonder. The movie begins when a student in a Montreal school discovers that his teacher has committed suicide by hanging herself in her classroom. Writer/director Philippe Falardeau doesn't rush headlong into a thick stew of grief and shock. He's interested in the events that follow and are influenced by the suicide. As it turns out, the suicide creates a job opening for an ambitious Algeria immigrant who needs work and who tells the school's principal that he spent 17 years teaching in Algeria. As played by the highly sympathetic Fellag, this new teacher begins to develop relationships with his 11-year-old students while dealing with his own issues: He must prove to Canadian immigration authorities that he shouldn't be deported. Fellag's Monsieur Lahzar seems to have definite ideas about education, but part of the movie's intrigue involves trying to understand a man who took a job no one else really wanted. Before the movie ends, we learn why Lahzar seems so elusive, and the movie deepens once again. There's flinty integrity and real humanity in Falardeau's Oscar-nominated movie, which last February lost in the best foreign-language film category to Iran's A Separation. The two films are too dissimilar to compare, but know that in a different year, Monsieur Lazhar easily could have emerged as the winner.