This Abe doesn't have it in for Congress; he's off to fight vampires. 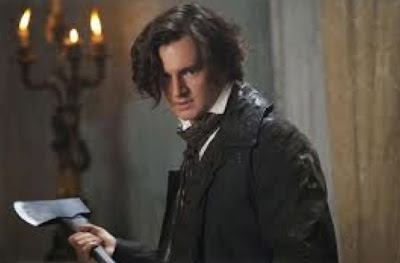 If you're a fan of wacked-out movie ideas, Abraham Lincoln Vampire Hunter has just about everything else beat by a mile. The title alone tells you just how crazy this film will be. Consider: Lincoln evidently didn't have enough trouble ending slavery, fighting the Civil War and desperately try to hold the union together, he also had to fight hordes of vampires, who allied themselves with the Confederacy and slavery.

Some things don't need to be parodied, they need only to be quoted, and that's how it is with much of this vividly realized, intermittently entertaining and often ludicrous adaptation of Seth Grahame-Smith's 2010 novel. Grahame-Smith wrote the screenplay, and Timur Bekmambetov -- known for the Night Watch and Day Watch movies -- directedmostly to mixed effect.

Not surprisingly, the Lincoln we meet in this action-oriented adventure isn't a mirror image of the Lincoln of history books, unless you happened to be exposed to texts depicting honest Abe wielding a silver-tipped ax and acting very much like a summer-movie action hero. It's Abe vs. one vicious vampire after another as the movie plies its way through quasi-historical waters.

Motivated by vengeance (a vampire killed his mother) and a desire to battle the dark side, Lincoln makes the ax his weapon of choice because of early days spent splitting rails. The story follows Lincoln from his boyhood to the presidency with vampires linking different periods in the leader's life.

Benjamin Walker makes a stalwart if not entirely prepossessing adult Lincoln, a character surrounded by a large supporting cast that includes Dominic Cooper (as a good vampire); Rufus Sewell (as the movie's very bad vampire); Anthony Mackie (as a black childhood pal of Lincoln grown into an ally in the fight against slavery); Mary Elizabeth Winstead (as Mary Todd Lincoln); Marton Csokas (as Lincoln's sworn enemy) and many more.

As you probably can tell, Abraham Lincoln Vampire Hunter is not an A-list production -- at least as far as casting is concerned.

It probably doesn't matter because action tramples character in a story that applies a simplistic moral overlay to its abundant collection of weirdness. Lincoln eventually moves beyond a desire for vengeance to pit himself against an evil that threatens his beloved country, and this Lincoln never wavers in his opposition to slavery.

You get the idea: The movie plays like another big-screen comic book, sketching its story in the kind of broad strokes that make nuance about as welcome as silver bullets at a vampire convention.

Bekmambetov employs CGI to useful effect in creating the movie's 19th century backdrops, and he piles on the action, most notably in a bleary scene involving a horse stampede and a finale that includes a burning bridge and a runaway locomotive.

History buffs will find fleeting historical references -- the Gettysburg address and Emancipation Proclamation -- that presumably are meant to ground a fantastical story in the soil of recognizable history.

If a movie such as this is going to have any credibility, it must be centered on a president who has mythic stature. Lincoln works. Nixon wouldn't.

Although Bekmambetov specializes in severed heads, assorted gore and high octane fighting in which bodies seem to freeze in mid-air, I found the action a bit repetitive. Abraham Lincoln Vampire Hunter didn't live up to my expectations for something preposterously grand, but it provided a fair measure of unintended chuckles and a bit incidental fun as it tried to swell to mythic proportions.

Posted by Robert Denerstein at 5:01 PM