'Rock of Ages' is faux to the max

Energy and flashes of humor keep this rock musical from going entirely off the tracks.. 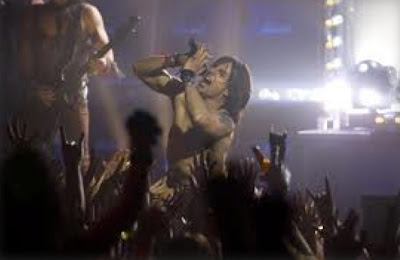 The musical Rock of Ages purports to explore the '80s rock scene in Los Angeles. At various points, the movie works as a bit of nostalgia-laden, cinematic fluff, but the longer it goes on, the more Rock of Ages tests one's tolerance for material that's been pushed to its campy limits.

Perhaps to give the movie cache, a variety of "names' have been cast in roles of varying size and importance. These include Tom Cruise, Alec Baldwin, Russell Brand, Catherine Zeta-Jones, Paul Giamatti and Mary J. Blige. These veterans surround and bolster the movie's main characters, a couple of wannabe rockers portrayed by newcomers Julianne Hough and Deigo Boneta.

Director Adam Shankman, who directed the movie version of Hairspray, pushes his cast through a variety of numbers in which recognizable rock songs punctuate a purposefully cliched story that sees Hough's Sheriee arrive in Los Angeles from Oklahoma in pursuit of a rock stardom.

Sheriee quickly meets Boneta's Drew, a waiter at the fictional Bourbon Room, a fabled launching pad for major rock acts. Drew also wants to be a rocker, and he shares his dream with Sheriee as they stand behind the famous Hollywood sign overlooking the city they hope conquer.

I spent most of the movie marking time until the next appearance by an adult. Looking as if he's trying to channel Mickey Rourke, a long-haired Baldwin presides over the financially troubled Bourbon Room, a task he shares with his loyal sidekick (Russell Brand, in a variation on the performance he already gave in Get Him to the Greek).

A semblance of tension arises when the holier-than-thou wife (Zeta-Jones) of Los Angeles' mayor launches a campaign against the Bourbon Room, vowing to close this den of rock iniquity, a worn-out plot development if ever there were one.

And then there's Cruise. Introduced in the movie wearing a cod piece and showing his butt cheeks, Cruise plays fading Rocker Stacee Jaxx, a dissolute, Scotch-swilling lead singer. Cruise gives Jaxx the eerie daze of a man who has just been hit in the head with a two-by-four, evidently the actor's attempt to simulate the effects of prolonged bouts of sex, drugs and rock 'n' roll. Alone in a cocoon of rock stardom, Jaxx has one friend, a pet baboon he has named "Hey Man."

Giamatti signs on as Jaxx's conniving agent, and Malin Akerman plays a Rolling Stone reporter who trashes Jaxx in print but not-so-secretely has the hots for him.

Little of the music used in Rock of Ages (Starship's We Built This City or Twisted Sister's We're Not Gonna Take It or Pat Benatar's Hit Me With Your Best Shot is likely to find its way onto my playlist, but I'm hardly the target audience for this one.

By way of a bit of by-the-way info, consider this: A gay kiss (to the tune of REO Speedwagon's Can't Fight This Feeling) is presented as a comic high point, mostly because of the actors it involves. A preview audience giggled mightily.

The movie's commitment to rock seems as phony as just about everything else about it. But Rock of Ages has enough pep to keep several cheerleading squads jumping for months and its large cast can't be accused of not being committed to the full silliness of the material.

Rock of Ages is a jiggling, wiggling junk heap of a movie with several amusing moments. And if nothing else, it provides Cruise with an opportunity to slink, slither and otherwise set his charisma phaser on full stun -- while singing, as well.

Why he'd want to do any of this is beyond me, but, then, Cruise never asks my advice anyway.