The chaotic world of male strippers

Soderbergh strips away plot and indulges in atmospherics -- and male stripping. 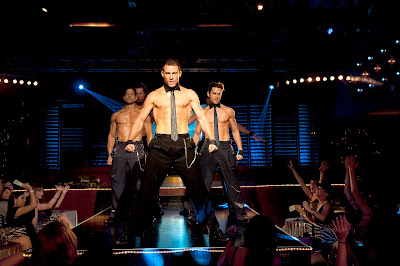 When I read that director Steven Soderbergh was making a movie about male strippers, I scratched my head, but figured that Soderbergh -- who has had both commercial (Ocean's Eleven) and artistic successes (Bubble) -- deserved the full benefit any doubts I and others might have about Magic Mike, a movie starring Channing Tatum.

I carried that accepting attitude into the movie's preview screening, but, sad to say, Magic Mike too often comes across as a lively hunk of junk cinema that does little more than titillate the demographic at which it seems to be aimed, the kind of women who consider watching male strippers a fun night out with the girls.

Not surprisingly, the talented Soderbergh sets the scene well, establishing the environment around a Tampa club called Xquisite, which is run by an oily impresario of beefcake who calls himself Dallas (Matthew McConaughey). McConaughey, who knows how to play sleazy, gives himself fully to the role of an ex-stripper who aspires to move his club from Tampa to Miami and who offers his strippers equity share in the business.

A variety of intentionally hockey strip numbers serve as showy highlights, although they tend become repetitive as the strippers play with male stereotypers -- from firemen to cowboys to cops to sailors.

A whisper of a story emerges when Mike takes a newcomer (Alex Pettyfer) under his wing. We see how Pettyfer's Adam -- a.k.a. The Kid -- learns to be an effective stripper and how he begins to enjoy a life that gives him money, women, notoriety and fun -- at least within the small, strip-club world.

It's probably a mistake to think of Magic Mike as episodic; it's really an immersive movie in which Soderbergh takes us into a world where the men are sex objects and, for the most part, seem to embrace the role.

Tatum, who at age 18 worked as a stripper, is credible as the kind of guy who has irons in many fires. Mike sees himself as a budding entrepreneur, and he hopes one day to start a custom furniture business. To date, he's gotten by on hustle, good looks and charm. He's one of those guys who seem to be dancing on air.

Adam's sister (Cody Horn) would like to see her 19-year-old brother on a more normal path and occasionally serves as the movie's scold, a role not even she takes all that seriously. Horn's Brooke is more concerned about her chaotic younger brother than about the propriety of stripping.

At about an hour into the movie's 110 minutes, I noticed two things. First, the air-conditioning in the theater where the preview screening was being held seemed to be flagging, not a good thing on a day when temperatures had reached 105 degrees. Even worse, the movie began to show its need for a stronger story.

The best Soderbergh can do is to introduce a secton in which Adam gets himself into trouble feeding ecstasy to a sorority girl. The incident further prompts Mike to wonder whether his life isn't a tad empty. Mike'a attempts to make a genuine connection with a woman he seems to see regularly (Olivia Munn) go nowhere. She sees him only as a sexual diversion.

Soderbergh opts for a naturalistic acting style that allows for plenty of hemming and hawing. The cast seems comfortable enough, although some of the strippers (Adam Rodriguez and Joe Manganiello) receive little attention, aside from Manganiello who is seen using a pump to ... er ... enhance his on-stage appeal.

Soderbergh doesn't judge anything that happens, suggesting only that young men outgrow this sort of thing (Mike) or turn it into a marginal form of show business (Dallas) or go along for the ride as long as it lasts (Adam).

There's no point moralizing when a substantial part of the audience will be attending for the beefcake alone, but Soderbergh could have said something a little more trenchant than what we find here.

The world of the male stripping ultimately isn't all that interesting, and this is a case in which what could have made for a lively and unusual backdrop basically becomes the entire movie.