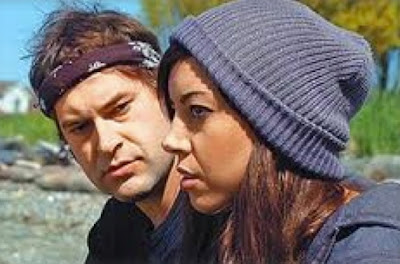 If American independent movies get any smaller, they may disappear entirely. I thought about this cinematic vanishing act, a mini-epidemic among the indie crowd, while watching Safety Not Guaranteed, a deadpan charmer that serves up an offbeat romance in a style so unadorned it appears to be no style at all.

The movie's central conceit involves time travel. Mark Duplass, a mumble core veteran who also served as one of the movie's producers, plays a Washington state recluse who claims to have invented a time machine.

Sci-fi mavens need not apply: Safety Not Guaranteed isn't really about traveling through time; it's about lives that seem to be marking time.

Duplass's Kenneth comes to the fore when a writer for a Seattle city magazine (Jake Johnson) notices a classified ad in which Kenneth seeks a partner for his time-travel adventures. Johnson's Jeff rounds up two interns (Aubrey Plaza and Karan Soni) and sets out to find the would-be time traveler.

Safety Not Guaranteed is another film about characters who appear to be damaged goods, and -- as befits the movie's taste for dreary locales -- our traveling trio checks into a shabby motel in rural Washington, cramming into one room in order to save per diem money for other pursuits.

Adrift in grief over her mother's death, Plaza's Darius also seems to be grappling with a non-existent love life and an ingrown tendency toward cynicism. Darius gradually begins to take over the story. She makes contact with Kenneth, pursues the time-travel story and begins to fall for her subject.

For his part, Soni's Arnau buries his head in his computer, and Johnson's Jeff pursues an old flame (Jenica Bergere).

The story creates a bit of uncertainty about whether Kenneth is crazy or whether he may actually have stumbled onto something momentous. He tells Darius he wants to return to 2001 to prevent the death of a former girlfriend. And, no, Sept. 11th isn't on the movie's agenda.

Director Colin Trevorrow tends toward comedy with a dour flavor, but Safety Not Guaranteed isn't always as funny as it probably wants to be. Within its narrow parameters, tough, the movie hits more than a few winning notes.

It's not physical safety that's at risk here, but emotional safety -- and although the world offers little protection in that area, Safety Not Guaranteed reminds us that people still sometimes take big leaps toward one another, and that such leaps always are a bit of a gamble.