People Like Us tries hard to mask formulaic thinking, but doesn't entirely succeed. 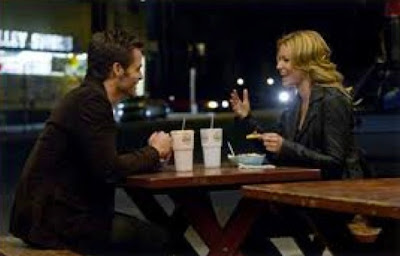 Sam (Chris Pine), fast-talking businessman, misses his father's funeral after making sure that he doesn't have the necessary identification to board a commercial flight from New York to Los Angeles. It's a quick stroke that immediately establishes People Like Us as a movie about an irresponsible wheeler/dealer who refuses to face the pain in his past.

People Like Us begins in earnest when Sam belatedly lands in Los Angeles with his girlfriend (Olivia Wilde) in tow. The rest of the movie involves the discoveries Sam makes as he lingers in Los Angeles, initially because he wants to avoid an FTC investigation resulting from an ethically dubious barter deal and later because of a relationship he develops with a single mom (Elizabeth Banks) and her 12-year-old son (Michael Hall D'Addario).

As it turns out, Sam's recently departed dad -- a record producer by trade -- left his son nothing but shelves full of vinyl albums and a shaving kit containing $150,000 that Sam's supposed to deliver to a stranger. It's here that the movie finds its hook: The money, we learn, is intended for Banks's Frankie, a half-sister Sam didn't know he had.

The rest of the movie charts Sam's humanization after he meets Frankie, a woman who works at a Los Angeles bar. Sam begins to learn that decency has its rewards.

Now without getting into more detail, let me point out that People Like Us is one of those movies in which the absence of a simple conversation -- presumably one most of us would want to have as soon as we discovered that we had an unknown sibling -- keeps undermining the movie's credibility. Sam won't tell Frankie who he is, which sets up the inevitable march toward to the uber-dramatic moment when he must reveal all.

Granted, the financially pressed Sam has his reasons for not saying anything (he's thinking about keeping the $150,000), but this kind of withheld information constitutes the same sort of hackneyed conceit that has fueled far too many low-grade romcoms. Here, it provides the obstacle for brother/sister reconciliation.

Sam and his mother (Michelle Pfeiffer) seem to have had it easier than Frankie. As a single mom and hard-working waitress, Frankie's always stressed, and to make matters worse, she's dealing with a wise-ass kid who has a knack for getting into trouble.

Unfortunately, the movie's most interesting character -- Sam's departed dad -- is never seen. Sam's father evidently was a major philanderer who was more interested in music than in his family. The relationship between this unseen impresario and Pfeiffer's character might have provided material for a far more original movie than the one director Alex Kurtzman has made. (Kurtzman, by the way, co-wrote the screenplay for the most recent Star Trek movie in which Pine plays Capt. Kirk.)

Despite a strong performance from Banks, who eclipses Pine, People Like Us ultimately comes across as an adequate formula job that tries to mute its predictability: Nothing wrong with a fresh twist on old contrivances, but People Like Us follows its predictable arc to a place where we've been hundreds of times before.