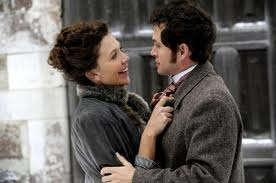 Hysteria tries to take a breezy approach to a 19th Century story about the dawn of a new consciousness in female sexuality. Put more succinctly, Hysteria is a comedy about the invention of the vibrator. Director Tanya Wexler pokes fun at the Victorian propensity to put a mask of acceptability on physical pleasure. To make the point, the movie includes a variety of brief scenes in which a strait-laced physician brings various women to climax by providing manual stimulation. As it turns out, such physicians, who perform their work with detached precision, experience an unfortunate occupational hazard. Call it hand fatigue. For them, the vibrator is a godsend. Hugh Dancy plays Mortimer Granville, a doctor who lands a job working for Dr. Robert Dalrymple (Jonathan Pryce), a physician who specializes in the aforementioned hand therapy. Dalrymple introduces electricity into the proceedings after he discerns another use for an electric feather duster his roommate (Rupert Everett) has invented. No story can run on vibrators alone, so Pryce's character has been given two daughters (Felciity Jones and Maggie Gyllenhaal). As it turns out, Gyllenhaal's cheerfully independent character operates a settlement house for impoverished women. The screenplay introduces a bit of romantic rivalry involving Dancy and the two daughters, but it doesn't amount to much. I read somewhere -- can't remember where or I'd happily credit the source -- that Hysteria is supposed to play like Masterpiece Theater with vibrators. It's a nice description -- and I wish it actually were true. Such a movie might have been funner, cheekier and more satirically relevant.