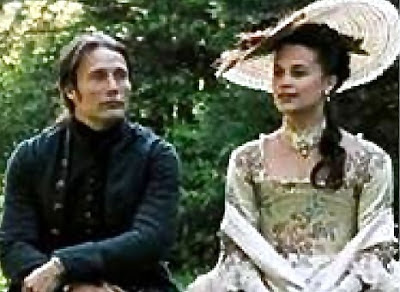 Dramas involving royal families can produce a mixture of titillating detail and -- if we're lucky -- a sense of higher purpose. The Danish drama, A Royal Affair, provides mild satisfaction on both counts by focusing on an affair between the Queen of Denmark (Alicia Vikander) and the physician (Mads Mikkelsen) who became her husband's most trusted adviser.

The story begins when Vikander's Caroline Mathilde, a member of the British nobility, is shipped to Denmark to marry King Christian VII (Mikkel Boe Folsgaard). Willing but sensitive, Caroline Mathilde quickly discovers that her husband is half fop and half lout, a mentally unstable monarch whose interest in whoring exceeds his interest in just about everything else.

Director Nikolaj Arcel eventually softens his portrayal of King Christian, who turns out to be more malleable than expected. He's also lonely, which is where Mikkelsen's Johann Friedrich Sturensee fits in. A German-born rationalist and committed proponent of Enlightenment values, Sturensee becomes the king's physician. His closeness with the king quickly puts him in an advisory capacity, and Sturensee uses his position to push the king toward all manner of reforms -- forbidding torture, ending privilege for nobles and allowing some freedom of the press, to name several.

These reforms don't come without opposition. Accustomed to running the country, ministers of the Danish cabinet have come to regard the king as little more than a royal rubber stamp. Members of the cabinet, as well as representatives of the church, aren't happy about ceding any of their authority to an intermittently deranged king and his German confidant.

So much for the movie's higher ambitions.

Now for the bed-hopping. The queen and Sturensee wind up as lovers. Their affair proves costly to them, but useful to the aggrieved nobles and their allies in the church, two groups that want to put both the king and the peasantry back in their places.

Mikkelsen, who played a Bond villain in Casino Royale, and Vikander, currently on view in Anna Karenina, generate the right amount of swooning chemistry, and, as the king, Folsgaard inspires real pathos. His King Christian can seem as lost as he is out of control.

All of this plays out with the right amount of period-piece authenticity, and A Royal Affair -- Denmark's submission in this year's foreign-language-film Oscar category -- proves that the path toward reform can be paved with both the highest ideals and the most common of desires.

Posted by Robert Denerstein at 10:03 AM