A woman who defies easy explanation 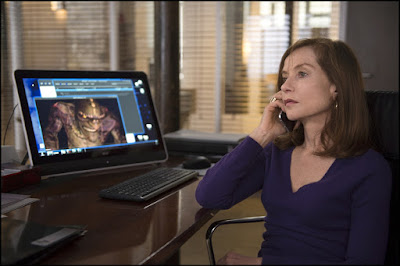 From the outset, it's clear that Elle has little interest in characters who behave in recognizable ways.

In the movie's opening scene, for example, a woman is raped in her home by a masked intruder as her apparently indifferent cat looks on. Once her assailant has left, the woman neither calls the police nor completely unravels. She collects herself, and goes about her business.

Two things may help explain this oddly unexpected behavior. First, the woman is being played by Isabelle Huppert, an actress who seldom allows herself a predictable beat. Secondly, Elle is the work of director Paul Verhoeven, whose filmography has ranged from Dutch art house favorites of yore (Soldiers of Orange and Spetters) to whopping Hollywood commercial fair such as RoboCop and Basic Instinct.

I can't say that Elle made a great deal of sense to me, but I agree with those who find fascination in Huppert's uncanny self-possession.

Nearly everything that takes place in Elle goes against the grain of normal assumption. When Huppert's Michelle, who owns a video-game company with her partner Anna (Anne Consigny) evaluates a game the company is in the process of developing, she insists that it must have orgasmic payoff. She wants to satisfy her audience, and isn't about to let rape put her off her business game.

Based on a novel by Philippe Djian, the plot is cluttered with relationships. Michelle's sleeping with Anna's husband (Christian Berkel), a man who treats their sexual liaisons with arrogance and entitlement. Michele's mother (Judith Magre) pays a hunky young man for sex, and then decides to marry him. Michele's ex-husband (Charles Berling) is a failed writer who has taken up with a younger woman (Vimala Pons), but still seems dependent on Michelle. Michele's dim bulb of a son (Jonas Bloquet) works at a fast-food outlet, and lives with a pregnant young woman (Alice Isaaz) who couldn't be more obnoxious and who eventually gives birth to a child that clearly was sired by someone other than Bloquet's character.

A Christmas party attended by most of the characters I've discussed in the preceding paragraph tilts the movie toward satire and helps introduce yet another character, a stock broker named Patrick (Laurent Lafitte). Patrick and his ultra-religious wife (Virginie Efira) live across the street from Michelle.

Attracted to the hunky Patrick, Michelle plays footsie with him at Christmas dinner. Earlier, she had masturbated while observing Patrick through a large pair of binoculars as he and his wife put up a Christmas display, a creche composed of life-sized figures.

I haven't mentioned a backstory about a heinous crime, but there's no need. No more can be revealed about the plot without offering spoilers, but Elle generates curiosity in the way it mixes bizarre sexual gamesmanship and bruising violence for what, in the final analysis, may be a strained critique of bourgeois pieties.

Whatever you make of Elle, you'll probably agree with the critical consensus that Huppert -- considering her work here and in the earlier Things to Come -- has given two of the year's most intriguing performances.

In Elle, she comes across as an uncompromising force of a woman who dares you to explain her behavior -- and knows that you'll probably fail.