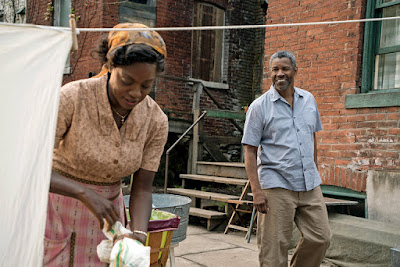 Anger and irony always have informed Denzel Washington's best work, and in his adaptation of August Wilson's play Fences, Washington finds a character that's equal to his taunting, incisive intelligence and his unwavering commitment to finding the dramatic truth of every character he plays.

Washington played the role of illiterate garbage man Troy Maxson in a 2010 Broadway revival of Wilson's 1983 play that also teamed him with Viola Davis, who again joins Washington to play Troy's long-suffering and sometimes indulgent wife. Davis's Rose has lived with Troy long enough be wise to his wiles: A former baseball player, ex-convict and a deeply opinionated man, Troy's a definite handful.

Set in Pittsburgh in 1957, the movie provides a context for understanding Troy. He was a good baseball player whose career peaked before Jackie Robinson broke the Major League color line. He says he played with men so good, Robinson couldn't even have made the same team as them. He's an embittered man who can serve up a sharp, piercing grin -- the kind of smile that cuts as much as it warms.

Fair to say that Fences, which Washington also directed and which takes place mostly in the backyard of the Maxson family home, survives as a play on film, but that doesn't mean that its great theatrical moments are in any way muted.

Both Washington and Davis scale their performances somewhere between stage and screen, and in his role a director, Washington clearly keeps allegiance with the rapid-fire exchanges in Wilson's text.

The movie's economical opening shows Troy riding the back of a garbage truck with his co-worker and pal Bono (Stephen Henderson). Troy and Bono empty garbage cans along the route. We get a quick glimpse of the white man who's driving the truck. That's pretty much all we need to know about the racial hierarchy of the Pittsburgh sanitation department in the 1950s, although the subject does come up later.

Visual flourishes aside, Washington allows the power of the performances to carry the day, obtaining fine work from a supporting cast that includes Russell Hornsby as Troy's musician son from a previous marriage, and Mykeleti Williamson as a World War II veteran who suffered brain damage as a result of his war wounds. Williamson's Gabriel wanders the neighborhood, a trumpet tied around his neck with a frayed piece of rope. He's the movie's holy fool.

But the film's key male relationship involves 53-year-old Troy and his younger son Cory (Jovan Adepo). Cory is a high school football star with college potential. Troy holds the young man back, insisting that he step into a dutiful but limited role as a worker. Learn a trade, Tory insists.

Put another way, Troy wants his son to become him, a desire that's partly selfish but also fueled by Troy's certainty, honed by experience, that sooner or later, the white world will betray an ambitious black man.

Fences fits into the best tradition of American family drama, a story about characters who carry the burden of their personalities as well as of their times and who sometimes suffer from a potent merger of the two.

For all of Troy's cruelty, the movie gives him the integrity of his convictions, and what I carried from the theater was a sense of the indelible rage that Washington breathed into Troy and the ability of his beleaguered wife to match it and go beyond it to a place of acceptance.

Despite some cinematic stiffness, Fences emerges as a movie with a love of the characters who populate it and a deep understanding of what they all must do to survive. Both in front of the camera and behind it, Washington has made a powerful piece of work.