Big name cast takes a shot at a movie version of a video game. 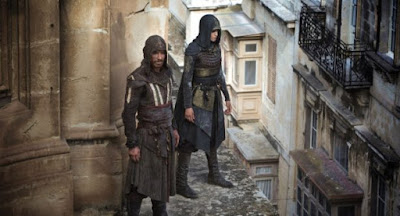 I suppose these days nothing should surprise us, but I must admit that I was taken aback to learn that Michael Fassbender, Marion Cotillard, Jeremy Irons, Charlotte Rampling and Brendan Gleeson all appear in Assassin's Creed, a movie derived from a video game about which I happily confess total ignorance.

Plotted to the max, Assassin's Creed revolves around a long-standing rivalry between The Assassins and The Knights Templar, opposing groups that vie for possession of the Apple of Eden, a gizmo that contains the genetic DNA code for free will.

Under the guise of promoting world peace, the Knights plan to use the apple to control mankind.

Divided between two time periods -- the present and 15th Century Spain -- the story begins by introducing us to Callum Lynch (Fassbender), a murderer sentenced to die by lethal injection. Lynch receives his punishment, but instead of drifting into oblivion, he mysteriously (perhaps even incomprehensibly) wakes up in a strange Spanish facility run by Abstergo Industries, which is presided over by Irons' Rikkin.

Rikkin's daughter Sofia (Cotillard) takes charge of connecting Lynch to a machine she invented. It causes him to explore his genetic roots by living as his 15th Century Assassin ancestor, Aguilar.

The Assassins, by the way, are an amoral group that pledges to use darkness to preserve the light. They'll protect the Apple of Eden by any means necessary.

And, yes, this is another movie that takes on conspiratorial airs, one more shadowy projection of the idea that somewhere unknown to us ordinary folks, the real drama unfolds.

There's a point to Cal's time travel: By becoming his 15th Century ancestor, Cal will be able to tell his industrial captors (a front for the Templars) where to find the coveted apple.

Forays into the past give director Justin Kurzel, who directed Fassbender and Cotillard in a screen version of Macbeth, an opportunity to pour on the action; the Spanish segments involve blurry battles in which the Assassins engage the Knights who are trying to wrest the apple from its owner at the time, Sultan Muhammad.

At this point, Cal acquires a female sidekick (Ariane Labed), who helps him kick butt. He also leaps off tall buildings, which -- I've read -- is a bow to the video game.

The movie's complicated conventions (often spelled out in mind-numbing expository dialogue) make it difficult to care what happens.

Some of Kurzel's imagery is strange enough to command interest, a gathering of 15th century clerics at which two Assassins are to be burned at the stake, for example. Moreover, Kurzel knows how to create menacing moods.

It occurred to me that the movie might be more fun as a cascading series of shadowy images, providing the actor's never opened their mouths.

The actors, however, do speak, treating the material as seriously as if they were doing Shakespeare, which -- come to think of it -- would have been a far better use of everyone's time.