It takes a while, but 'Sing' connects 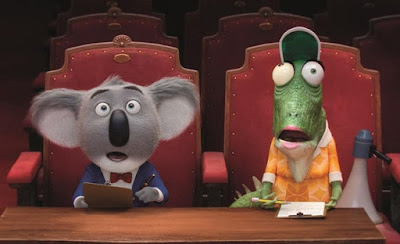 I'm not going belabor Sing, a commercially potent bit of family entertainment with a decent amount of humor to carry it past its dull spots. This animated romp centers on a show-biz loving koala bear named Buster Moon (voice by Matthew McConaughey) who needs to raise money to save his beloved theater. To achieve his goal, Buster decides to sponsor a singing contest. As the result of a misprint, the winners think they'll receive $100,000. Poor Buster. He intended to award only a $1,000 prize. The plot makes room for a teeming cast of anthropomorphic animals such as a rat who croons like Sinatra (Seth MacFarlane) and a very shy elephant (Tori Kelly) who eventually unleashes a potent rendition of Leonard Coen's Hallelujah. Scarlett Johansson voices a porcupine punk rocker. We also meet a singing pig (Reese Witherspoon) who tries to juggle motherhood and a stage career, no easy task because she has 25 piglet kids. Then there's the gorilla (Aaron Egerton) who abandons his criminal father's ways to pursue a career on stage, but still longs for Dad's approval. There are more animals, but I think you get the idea. Sing makes use of many already popular tunes before arriving at a finale that pretty much rescues the whole enterprise. Director Garth Jennings (Son of Rambow) and his team don't offer animated perfection, but Sing ought to give Moana some competition for holiday viewing in a season that's running short on fun fare.