War? What's it good for? A 'Star Wars' movie that pits rebels against the Death Star

Rogue One may stand alone, but it doesn't stand above the best Star Wars movies. 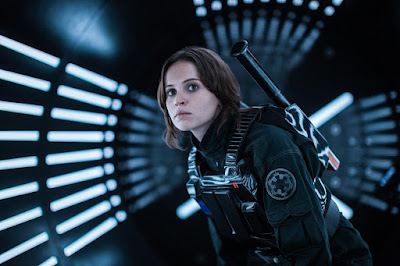 Rogue One: A Star Wars Story takes place at a time when The Empire, imperial source of all evil, is in the process of constructing a Death Star, a weapon so powerful it can destroy entire planets.

As familiar as that may sound, Rogue One turns out to be a slightly different kind of Star Wars adventure. Production notes for the movie describe it as a stand-alone effort -- albeit one that's meant to fit into the Star Wars universe.

Led by director Gareth Edwards (Godzilla, Monsters), the Disney team takes us on a less-than-epic tour of a darkly hued Star Wars world. We meet a ragtag group of rebels that fights the massive Empire, but the movie mostly takes the twinkle out of Star Wars' eyes, opting instead for a battle-heavy extravaganza with stunt-and-grunt impact.

Felicity Jones plays Jyn Erso, a young woman whose father was a scientist who tried to hide from the Empire but later was captured and forced to work on the Death Star. When the movie opens, Jyn and her father (Mads Mikkelsen) are living in isolation on a remote planet.

Troops from the Empire swoop in, kill Jyn's mom and take Dad prisoner. Jyn escapes, and grows into a young woman who's recruited by rebels.

Cinematographer Grieg Fraser (Zero Dark Thirty, Foxcatcher) seems to prefer dark imagery that often obscures the actors, which isn't altogether bad considering that Jones's performance feels a bit muted. She's the latest version of a female protagonist who can handle herself -- and others.

Cassian Andor (Diego Luna) leads the rebel mission which is supposed to locate Jyn's father. Neither Cassian nor Jyn initially wants anything to do with the other; it's not providing anything by way of spoilers to say that their relationship evolves -- although it doesn't ignite much by way of sparks.

The other characters include Chirrut (Donnie Yen), a blind monk who knows how to use The Force. Baze Malbus (Jiang Wen) serves as Chirrut's less well-kempt pal.

Other characters include the morally ambivalent Bodhi (Riz Ahmed), and K-2SO, a long-armed droid voiced by Alan Tudyk with 3-CPO intonations. K-2SO comes closest to giving the movie a big of comic spin. It tells you something about this massive enterprise that the character with the most humor is a droid.

The opening of the movie does a bit of confusing planet hopping, before explaining the role that's being played by an oxygen-snorting character portrayed by Forest Whitaker.

You'll also see brief appearances from Darth Vader, but the evil Empire mostly falls under the leadership of Krennic, who appears in a white cape and is played by the always menacing Ben Mendelsohn.

Alien creatures also appear, but this time, few are played for laughs.

I always get a bit lost in Star Wars jargon, so forgive me if I'm wrong in saying the planet Jedha is where much of the movie's explosive urban warfare takes place. A climactic battle is set on Scarif, a planet with beaches and palm trees that give the movie a war-in-the-Pacific flavor.

By the end, Edwards pretty much turns Rogue One into an action blur (on the ground and in space), an interminable battle in which, among other things, space ships and space stations ram into one another with brute force, but without much by way of the rousing thrills.

References to predecessor movies let us know that we are, indeed, in the Star Wars universe, and Rogue One definitely benefits from the association. I'm not sure how it would fare as separate hunk of sci-fi. Probably not so well.

Edwards evidently wanted a bit of war-movie verisimilitude to characterize this journey into the Star Wars universe. That doesn't mean there's no zap and pow to the battles, but it makes you wonder whether the filmmakers have had a memory lapse. Isn't Star Wars supposed to be a fantasy -- telling but still a fantasy?

Oh well, the Star Wars canon is vast, and more movies are planned. But for all its huffing and puffing, this one only intermittently feels like a full-blown helping of deep-space fun.

One thing you can bet on: Devotees don't much care what critics think and will spend lots of time hashing this one out among themselves. If you've grown past that point in your life, I wouldn't say Rogue One, though hardly a bad movie, offers sufficient reason not to get on with other business.