Death, love -- and a waste of time

A strong cast can't make anything credible out of weepy Collateral Beauty. 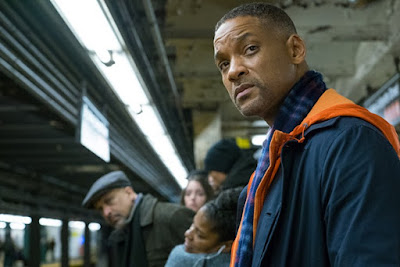 Burdened by a whopping contrivance, Collateral Beauty -- a movie that wants to talk about unbearable grief and the need for human connection -- resembles a luxury passenger liner that sinks soon after leaving the dock.

The luxury reference has to do with the presence of an A-list cast featuring Will Smith, Kate Winslet, Edward Norton, Helen Mirren and Keira Knightley. They're all fine actors, but Collateral Beauty blows the opportunity for great ensemble work by putting the cast into one credibility-challenging or maudlin scene after another.

The story might be viewed as a fable grounded in what may have been intended as a plausible reality, the world of New York advertising.

Smith plays Howard, a hot-shot advertising executive who loses his six-year-old daughter to a rare form of cancer. Mired in grief, Howard completely shuts down. Not surprisingly, his near-catatonic state threatens the life of the agency he founded with his partner (Norton).

The plot's big twist arrives when Norton and two of his colleagues (Winslet and Michael Pena) decide to hire a trio of actors (Mirren, Knightley and Jacob Latimore) to visit the dejected Howard as the embodiment of three abstractions: Death, Love and Time.

Why Death, Love and Time? In the movie's prologue, Howard tells his staff that these are the vital ingredients in selling products. Moreover, since the death of his daughter, Howard has been writing and mailing letters addressed to Death, Love and Time. The letters give voice to Howard's anger at the way all three have betrayed him.

Howard's colleagues have two objectives: They want to save Howard from his depression, and they also want to have him declared incompetent. They'll then be able to sell the company, of which Howard is the majority owner, to an eager buyer.

To achieve their goal, this trio of ad execs also hires a private investigator (Ann Dowd) to photograph Howard talking to Death, Love and Time; the execs then will have these figures digitally removed so that it looks as if Howard is ranting to himself.

When it's not focusing on Howard, the movie doles out other forms of pain. Winslet's character wonders whether she hasn't sacrificed the chance to have a family by spending too much time at the office. Pena's character deals with a recurrence of a long-dormant cancer, and Norton's Whit worries about fixing the screwed-up relationship he has with his young daughter. She won't talk to him because he cheated on her mom.

Putting all of these fine actors into one movie must have seemed like a casting bonanza to director David Frankel (Hope Springs and The Devil Wears Prada). Too bad Allan Loeb's screenplay doesn't play to the cast's strengths: It falls to young Latimore to give the movie's most (and perhaps only) compelling performance.

If all of these actors weren't enough, the movie adds Naomi Harris as a woman who leads a group of parents who've lost children.

The drama comes to a head on Christmas Eve making Collateral Beauty an offering for the season that's intended to mix laughs, tears and greeting card wisdom. Who knows? It might have worked had Frank Capra tried it during the 1930s.

Today, Collateral Damage looks precisely like what it is: a concept that never develops into a real or convincing movie.